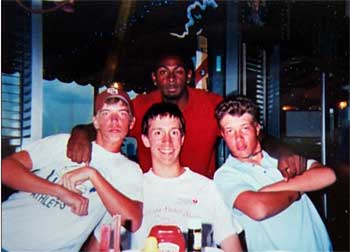 Travis Knapp submitted this one. "This picture was taken July 4th at the Navy Pier. Memphis Sound performed both outside and inside the Navy Pier and was then given the night off. In the picture is Ben Williams (left), me (front center), Andrew "Ender" Lovick (right), and in the back is Justin Johnson. Justin was a visual tech while the three of us were rookies in Memphis Sound (Ben on cymbals, Ender on mellophone and me on soprano). The three of us were also all from the same school." Thanks Travis! E-mail your best shots from the summer to dave@dci.org along with where and when the photo was taken. Send some biographical information about yourself as well. We'll give you full credit. Also, let us know if you want your e-mail address included.