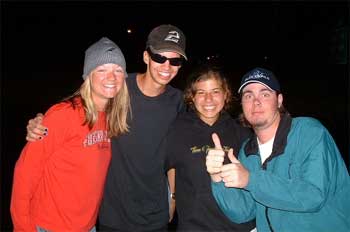 Jessika Filler, who marched in the Seattle Cascades baritone line this past summer, sent in this one. "This picture shows how drum corps can bring people together from all over the place. It was taken this past summer after the Portland Summer Music Games. On the left is me, and the other three cool cats in the picture all marched in the Blue Devils 'B' this season (I marched there on mellophone in 2003). "Second from the left is Brandon, a baritone player. I met him when I was visiting and playing with my boyfriend's high school pep band at a football game. Being a baritone player, I hung out with Brandon, who played trombone, quite a bit while my boyfriend was the drum major. "Next to him is Stephanie, a trumpet player. She goes to the high school I went to, and she's one year younger than me. Her big sister graduated two years before me and was my "big sister" in the band, so I instantly adopted Steph when I met her and we've been close ever since. "And last, but not least, is Bob, a trumpet player, on the right. I met Bob when we auditioned for the Blue Devils 'A' corps last November. During a lunch break I was driving with some friends toward the local mall and saw Bob walking on the side of the road, so we picked him up and had lunch! "Now obviously, these three all know each other quite well, since they march together. But it was great to get this snapshot and later think back on how my experiences which each of them were all so different." Thanks Jessika! E-mail your best shots from the summer to dave@dci.org along with where and when the photo was taken. Send some biographical information about yourself as well. We'll give you full credit. Also, let us know if you want your e-mail address included.