In honor of Frederick Fennell's 90th birthday today, here's a Fanfare interview Mike Boo conducted with Fennell. It originally ran on DCI.org in the fall of 2002. Drum Corps International was proud to host famed maestro Dr. Frederick Fennell at the 2001 World Championships. Fennell founded the wind ensemble movement at Eastman School of Music in Rochester, N.Y., and taught at the school from 1933 until 1962. His groundbreaking recordings for Mercury Records introduced wind ensemble literature to the world, and have recently been made available on CD. He was among the first conductors of any idiom to record for CDs. 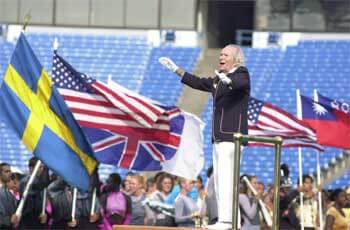 Frederick Fennell conducts the combined corps in 2001.
He has 72 highly praised albums to his credit. Well into his 80s, he still writes extensively, works band camps throughout the summer and conducts about 70 bands around the world every year. Then past year alone has seen him conduct in such diverse places as Argentina, Switzerland, and Tokyo, where he was principal conductor of the Tokyo Kosei Wind Symphony from 1984 until 1999.

Boo: What about the thrill of hearing a corps on the field? Fennell: The presentation of what has finally been worked out over several rehearsals commands your attention. Not only the playing of the brass, but also the physically handling of the instruments from the position of rest and the position of play. The flags are used both as flags and as objects that can be thrown into the air and grabbed out of the air, in coordination with the music, emphasizing the music. The sound of the group usually, let's say playing a "six" at the conclusion of their presentation, is obviously planned to attract the attention of the audience, unless they choose to end the presentation extremely quiet. I don't imagine very many drum corps do end quietly, but everything depends on the theme or what the motif is. If they choose a motif, is it to their advantage to choose an idea like the work ethic as Santa Clara did [in "New Era Metropolis"]? You could of course play something like the evolution and contribution of Spanish music, to pick one thing, or the difference between 19th and 20th Century Russian music. This idea of having a show representing a workday is very well carried out. And the program will make that clear, like the simple-but-effective idea of having all of them looking at their watch. I just want to be sure I mention the fact that when the members age out, and maybe they are still in the final years of their college education, they will discover that much of what they have experienced in drum and bugle corps can be used in their final years of school. It can also be used in the earliest years of their job, what they have been to school to prepare themselves for. The drum corps is going to contribute to their future in many handsome ways. It would be very difficult for so many groups to understand and work at the work ethic tempo of a drum and bugle corps, because most kids in schools are not in corps. But, they should somehow be able to make the work ethic contribute to their work. It is a work ethic that is seen at practices. The kids are totally dedicated to get into place when their instructors tell them, and everyone immediately goes to where they should be. You don't have to stop and worry about it, they know what they're doing. This work ethic would be such a desirable aspect of teaching school groups of any instrumentation, instrumental or vocal. I spent enough years as a music director with a very powerful group in Japan [the Kosei Wind Ensemble] to know that the Japanese understand what we are seeing here is the work ethic. And among other reasons, this is one of those reasons why the Japanese concert groups that tour the United States always produce such spectacular results. To music educators: Don't make decisions about drum corps without really investigating it. Read part 2 of Boo's discussion with Fennell.