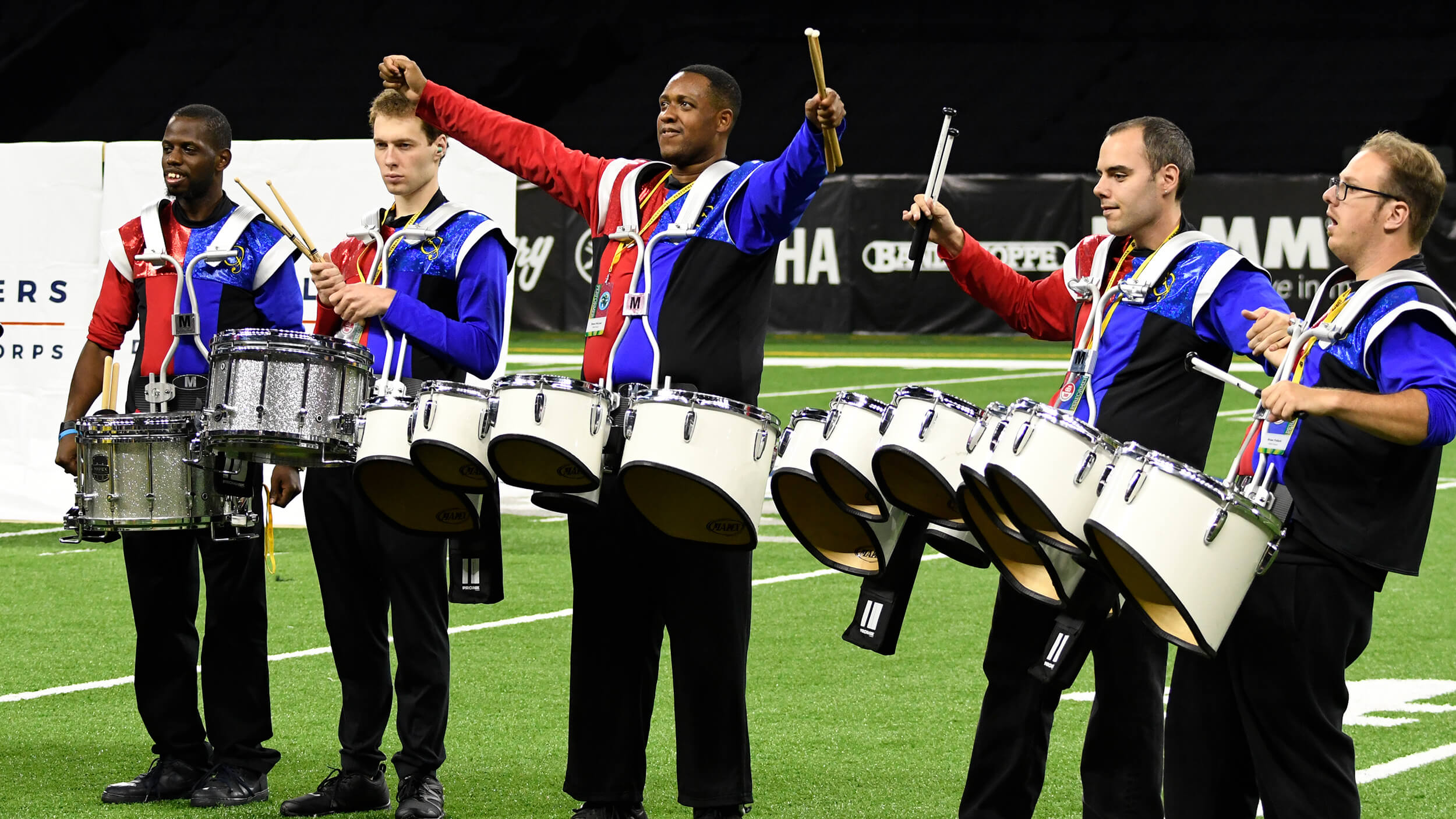 It was a chance meeting, really.

FREE Players Drum Corps director Brian Calhoun, at the time a spectator at the 2017 DCI World Championships, was simply grabbing a bite to eat. But he happened to come across Allen Buell, president of Drum Corps Associates (DCA), who presented him with an idea.

“Allen and I ran into each other,” Calhoun said. “And the conversation struck up about us maybe doing DCA Championships once everything was over with DCI.”

Calhoun’s time at the 2017 marquee event in Indianapolis had been intended to provide a one-year glimpse into the future, to his corps’ fast-approaching performance at Lucas Oil Stadium in August of 2018.

So, why not look one year further for a quick second?

By that time, the FREE Players — a multi-faceted marching music ensemble featuring differently-abled performers — had already taken part in the WGI Percussion and Color Guard World Championships in previous years, and performed at the DCI Eastern Classic in Allentown, on top of its plans to appear at the 2018 DCI World Championships.

The decision to debut at DCA simply brought things full circle. And this weekend in Williamsport, it’ll finally come to fruition.

“Here we are, a few days away from Labor Day Weekend, making history once again at a prestigious world championship event that we’ve never performed at before,” Calhoun said. “And we’re so excited.”

It was just over a year ago that FREE Players took over the biggest stage in drum corps, performing twice at Lucas Oil Stadium as well as at the SoundSport International Music and Food Festival and DrumLine Battle competition during DCI World Championships Week in Indianapolis. Several members of the ensemble also took part in the DCI Performers’ Showcase.

Those experiences and many others have FREE Players members well-prepared for the next adventure in the corps’ string of marching music appearances.

One year ago today we made history at @DCI #DCI2018 Good luck to all of our friends competing tonight #DCI2019 @DCIMandarins @JerseySurf @TheBlueDevils @bostoncrusaders We will not be at #DCI this year but we will be @DCACorps #DCA2019 Labor Day Weekend! pic.twitter.com/XtnwsAqrEQ

The growth that’s taken place since last August, in the eyes of Calhoun, has been night and day. Throughout every facet of the ensemble, he sees major improvements being made by individuals and sections alike as the corps nears yet another milestone.

That kind of year-over-year improvement has been evident since FREE Players’ inception in 2011. At last year’s Indianapolis appearance, FREE Players debuted a brass section for the very first time and featured the music from the “Rocky” franchise in its production, “Against All Odds.”

The 2019 edition of FREE Players presents “Boundless,” a show that touches on the importance and beauty of breaking free from perceived limitations. According to Calhoun, this year’s production will showcase the members’ growth as performers, even just from last season to now.

“As long as you have enough heart, you can succeed and achieve anything,” Calhoun said of the show’s message.

“It’s great,” said Carly, a FREE Players front ensemble member. “I wouldn’t say it’s better than our DCI show last year, but it’s different. It’s really different… Performing it is really cool because you get to feel the different emotions and portray them to the crowd and just be in one heart with the audience.”

Before the corps’ performance of “Boundless” at this weekend’s championship event, seven of its members will take part in DCA’s Individual & Ensemble competition at the Williamsport Community Arts Center, Friday evening.

Sunday, after the conclusion of the championships, FREE Players will also perform with Tri-Valley Brass, Freelancers and Star United at the DCA Alumni Spectacular, held at Williamsport Area High School.

“I’m a little nervous, but I have it memorized,” said Carly, a snare drummer who will be performing her first solo in the “I&E” competition. “I’ve been practicing a lot to get everything down.”

But this year’s progress is plenty noticeable off the field as well.

Granted, the trip to Williamsport is certainly less strenuous for a group based out of Bethpage, New York, than, say, trekking to Indianapolis was back in 2018.

The biggest difference is not only the sheer distance, but the nature of the travel; a year ago, FREE Players needed to book air travel for its entire membership, but this year’s trip can be made without even renting outside ground transportation.

As a result, the group has been able to use its fundraising efforts not only to support its DCA dreams this summer, but also to set itself up in advance for a strong and memorable 10th anniversary year as an ensemble.

“With Williamsport, that’s five hours away from where we’re located, so we’re actually able to take our agency van,” Calhoun said. “We don’t even need to rent a bus, which has allowed us to save tremendously on fundraising and use our fundraising to be able to do other events leading into 2020.”

This weekend certainly isn’t stress-free, though. For one, based on the nature of the summer months, with members having their fair share of family vacations and the like, FREE Players’ Friday night rehearsal will be its first with the entire membership together, at the same time, in one place.

But all the details aside, the FREE Players have done this before. They’ve done it several times now, to the point where they’ve become a staple in all corners of the marching music community. They’ve established themselves as a fan favorite and an entertaining group of performers on nearly every stage in the world of the marchings arts.

Saturday, they’ll check off another box.

“Yeah,” Calhoun said, with a smile. “No pressure.”