I marched in The Cavaliers with Paul Seal in the mid-1970s. He showed up at the Lisle show with three of his four children. Paul: I played baritone in Cavalier Cadets from 1973 to 1975 and the Cavaliers from 1976 to 1983. After I aged out I studied in Rome and then went to law school. I now do workers' compensation defense. My involvement in drum corps is strictly as a spectator. My oldest child is entering high school and will be in the marching band. All three of my children (ages 14, 11, 9 and 7) want to march drum corps. We moved to Roselle (a western suburb of Chicago) because of the music programs so they could get better prepared to march a drum corps if they wish. Hopefully, they'll only be in a maximum of two corps. I'd love them all to march in one corps, but I doubt the by-laws will be changed to allow my daughter to march in the Cavaliers. 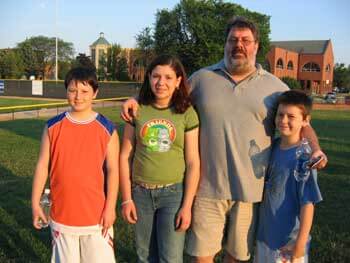 The Seal family
Sydney, age 14: The corps are cool to watch because they play so well and the visual part is so interesting. I would love to march with Blue Devils. I'm taking trumpet lessons to prepare myself. Eric, age 11: I want to march with the Cavaliers. I play tuba. I'm in all the bands I can get in and take private lessons and will learn from the marching band. Sean, age 9: I want to play baritone with the Cavaliers. I'm not old enough to play in band yet, but I mess around with my Dad's concert baritone. Mary, age 7 was not at the show. Paul: The big differences since I aged out became apparent when we went to the corps dress rehearsal. The talent level gets better every year. In June, they're already better than any corps I marched in when August came along. The talent level is scary. The kids in corps today are professionals. It's harder each year to see much resemblance to when we marched because the talent level and level of the shows is so much higher than what we did. I'm astounded. I left the dress rehearsal thinking it can't get much better, but each year it does. I don't know what they're feeding them. The years I marched were not the strongest years of the corps. We never had a total package. It was a ton of work but a lot of fun. I just get exciting by the sounds of brass and percussion on the field. I love playing in the community concert band, but it will never be a substitute for marching with 60 brass. That's what I liked the best about the corps. What I like the most now is the visual shows. The visuals have improved even more than the music. The visual productions are unbelievable, and the speed they do it while playing. Also the percussion...the front pits were small when I aged out, but now they're huge. It's a good thing the corps march as good as they do, because if they didn't, I wouldn't be able to take my eyes off the pit. The drums used to march up and down the 50 while in a block, but now they're part of the actual drill. I don't know how they do it. Some of the people I marched with I spend time with comparing the good old days with now. I can't think of too many things that were better then. I think it's much better now. It's changed almost entirely for the better. It's fun. I went to the Regal Theater for the fans' favorites and it was fun to see the old shows. But I would still rather watch the corps today.