After returning for a seventh time to the familiar confines of Camp Randall Stadium in Madison, Wis., for the 2006 World Championships, DCI will journey west to the state that is home to more member corps than any other, sunny California. Drum Corps International's trip to Pasadena and Rose Bowl Stadium in 2007 will be just the second time drum corps has come to the illustrious venue known as "America's Stadium." DCI first stopped by during the 2004 DCI Tour of Champions, which was Pasadena's first big chance to lure drum corps to the Los Angeles suburb, says Pasadena Event Committee Chair Mike Riffey. "We were aware that DCI was interested in holding a championships in California," says Riffey. "We knew San Jose was in the pot, and they had also thought about San Diego. We took the opportunity to show [DCI Executive Director] Dan Acheson and the whole DCI group a very good time." 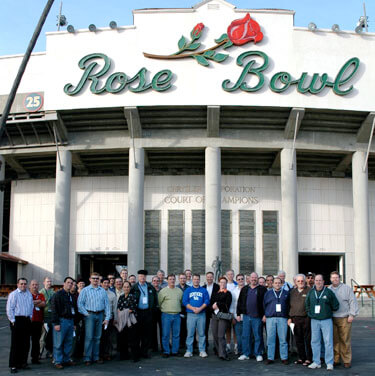 The DCI Board of Directors at Rose Bowl Stadium this winter.
Several months later, Riffey says, his group was notified that DCI had selected Pasadena and the Rose Bowl to host Championship Week for 2007. Riffey, the 2003-2004 president of the Tournament of Roses (TOR), the organization that runs the Rose Bowl football game and parade, was a natural to head up the effort. As TOR president he was the first to bring a drum corps unit, the Santa Clara Vanguard, to march in the Rose Parade in 2004, and selected "Music, Music, Music" as his theme. "Music is an international language," says Riffey. "You're born with it, you die with it, walk into an elevator, turn on a car... it never dies. That's why I chose music as my theme. And if you get 135 young musicians that put their heart into it, it's huge." Riffey was first exposed to drum corps about 15 years ago. "I first went down to a show in Long Beach with some other couples that enjoy good music, and I just love it. That type of precision is so amazing. I think it's just going to blow everybody away that's never seen a drum corps perform." Riffey's goal is bring the largest crowd DCI has ever seen, at least 25,000, to Division I Finals in 2007. One of the benefits of being involved with the TOR is the contacts he already has in the area, Riffey says. "We have a lot of perks with the city and the newspapers, and we have a guy who will help DCI with media relations here. He's also a former music chairman of the TOR," says Riffey. The Tournament of Roses organization has grown from its humble beginnings as a recreational event for the Pasadena Valley Hunt Club to an association of 935 volunteers serving 32 committees, with a total operating budget of about $40 million. "We'll have some of the TOR volunteers, and Pacific Crest has also offered a huge number of volunteers," says Riffey. "A past president of the TOR is handling the day-of-event arrangements, and the visitors and convention bureau is handling housing for the corps. Our grounds person is a top NFL grounds person, and he's flying out [to Madison] to check out everything." Because the Rose Bowl Stadium field is natural grass rather than synthetic turf, the venues for the various stages of corps competition will be split to minimize wear and tear on the field. "Division II and III Prelims and Semifinals will be at Pasadena City College, and their Finals will be in the Rose Bowl Stadium, so everyone gets a shot at marching there," says Riffey. "All Division I activity will be in the Bowl, and the Individual & Ensemble competition will be at the Convention Center." Because the Rose Bowl is accustomed to hosting very large events with complex logistical needs, Riffey anticipates very few challenges in hosting DCI at the Rose Bowl Stadium. "The stadium is self-sufficient. It's a very old stadium, but it's in very good shape, and the set-up gives us a lot of flexibility to move corps in and out of the performance area," he says. "The parking lots can hold a lot of buses – on Rose Bowl game day we park 1,500 to 2,000 buses, plus 40,000 cars, so parking will be no problem." About the only roadblock, Riffey says, is finding schools with showers to host the corps. "A lot of schools in Southern California just aren't built with showers in them," he explains. "Gym space, auditorium space, that's no problem, it's just finding the showers. So we may be housing corps as far south as Orange County, which is 30 or 40 miles south, but we have great relationships with band directors in the area," he adds, "and we're already starting to set things up, so we'll be ready." Hosting DCI will be "a huge event for the city. To have the World Championships is just a huge coup," says Riffey. "Friends are already asking me if they can get tickets." Riffey hopes that fans from all over the U.S., not just California, will take advantage of the opportunity to vacation in the area. "Plan a week. Go to the beach," he suggests. "Take advantage of the whole Los Angeles area, the entertainment capital of the world." In addition to DCI Championship Week activities, fans can visit Old Pasadena and the entire San Gabriel Valley area, as well as Los Angeles attractions such as Disneyland, Universal Studios, Hollywood, and L.A. pro sports. DCI fans who are in Madison this week can visit the Pasadena Convention and Visitors Bureau booth in the DCI Marketplace to find out more about Pasadena and get free Pasadena 2007 posters, patches and other memorabilia. Riffey hopes the distance will not deter fans from the East Coast from attending the 2007 Finals. "There's nothing like the Rose Bowl as a premier destination to come to," he says. "If you're a drum corps fan, I don't think the distance should matter at all – you should be there to witness history. It's the first ever Championships in the Rose Bowl, hopefully the first of several, and I think anything that happens in the Rose Bowl is an experience unlike anything else." Get more information about Pasadena 2007.