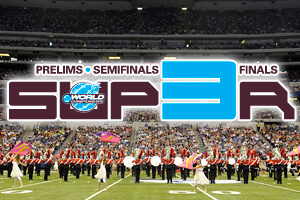 Lucas Oil Stadium
With the exciting conclusion of the 40th Anniversary 2012 Drum Corps International Tour still fresh in our memories, we're already getting set for our series of 2013 World Championship events Aug. 8-10 in Indianapolis! 2013 Super 3 ticket packages will include seats at all three nights of World Championship competition at Lucas Oil Stadium in downtown Indy. Next year's Championships are only 300 some days away, so take this early opportunity to grab the seats you want in the most premium seating sections. Learn more and order your 2013 ticket packages today.