"Getting your license" can be a rite of passage… an experience shared by millions of new drivers each year as they take to the roads; by countless couples awaiting the opportunity to be joined in marriage; and by aspiring professionals in any number of disciplines, as they await certification for their successful completion of an examination of their preparedness to enter the workforce.

As we continue to expand the reach of Drum Corps International and its member organizations, it is our responsibility to ensure that we are compliant with copyright law ...In the case of Drum Corps International and its member corps, however, there are no long lines at the motor vehicle agency, no visits to the city hall and no nervous pacing while final test grades are tallied. Each season, Marching Music's Major League?„? must remain at the forefront of the ever-evolving legal requirements and compliance issues centered around the public performance – as well as the audio and video recording – of its spectacular productions.

"As we continue to expand the reach of Drum Corps International and its member organizations, it is our responsibility to ensure that we are compliant with copyright law and that we are working to protect the rights of those who own the copyrights to the music being performed," says Dan Acheson, executive director of Drum Corps International. "We are fortunate to count among our ranks some of the most talented arrangers and composers in music education and in the entertainment industry, many of whom are also creators of copyrighted works. We will continue to be diligent in our commitment to understanding our responsibilities and to educating our members as to the need for compliance in this important area of our operations."

Here is an overview of the various types of licenses which must be obtained by Drum Corps International and the participating corps long before the world's most elite marching music ensembles take to the field of competition:

1. A License to Arrange must be obtained from the copyright owner (or its designated representative) for each of the copyrighted compositions performed in the repertoire of each corps. This permission is required whether the corps incorporates the copyrighted material for just a few seconds or for a lengthy production.

2. After receiving permission, the corps' musical arrangers prepare the show for the field. Drum Corps International is then required to obtain Performance Rights from industry organizations such as ASCAP, BMI & SESAC which are needed in order for the corps to perform the copyrighted music at a public event. 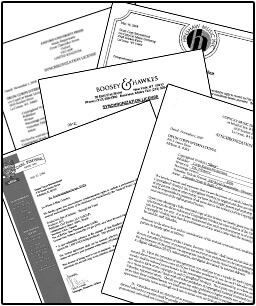 3. Once the show has been performed, Drum Corps International and the corps will often record their performances for audio download or inclusion on a compact disc recording. At that point a Mechanical License is required in order to legally record a copyrighted song. Mechanical licenses are awarded directly from the copyright owner, or from their licensing agency or other rights-management entity.

4. In the "digital era," Drum Corps International and/or the corps may wish to post on their respective Web sites "streaming audio" tracks of the music performed in competition so that fans can listen to the music before they decide to purchase it. Before the music can be posted, however, Drum Corps International must obtain a New Media Performance License to cover the legal use of copyrighted music on the Web site. Approval for these licenses must also be granted from the major performance rights organizations.

5. Drum Corps International is required to obtain a Synchronization License in order to produce DVD recordings of the copyrighted works included in the corps' performances. The synchronization license is issued by the copyright owner, however, this type of license covers only the use of the song on a video. So, if DCI wants to use a popular song from another recording as the background music during a segment of a broadcast, for example, they must then obtain a synchronization license for the song AND…

6. A Master Use License covers the incorporated use of the recording of the song. These licenses come from the record label, and are intended to cover the copyright that is held on the original recording.

7. The remaining licenses, after the audio recordings are made and the video has been produced, pertain to the television broadcast of Drum Corps International events. When DCI produces another ESPN program, or a similar program run on another network, it is required to obtain, at a minimum, a Broadcast License to cover the use of the compositions in the broadcast program. Depending on the network, a Performance License may also be required if the specific network does not have a Blanket Performance License Agreement in place with the major performance rights organizations. PBS broadcasts are subject to different licensing requirements, as those programs are covered under a separate aspect of the law.

In most cases, each of the required licenses is accompanied by a fee or royalty payment, which serves as compensation to the composers and publishers for the use of their copyrighted material. Each of the corps is responsible for covering the "license to arrange" expenses on their own behalf, while Drum Corps International handles the payments for various other licenses.

"Music licensing and related expenses have grown to represent a sizeable portion of our annual budget," said Acheson. "Although it is a considerable ammount for any non-profit organization, it is an expense which is necessary not only to comply with the law, but also to do the right thing on behalf of the talented artists who provide much of the musical source material used in the outstanding performances of the corps."