It's been more than two weeks since I have had access to the Internet and a lot has happened. When we left the hotel after the first week of 9-to-9s, we headed up to Angels camp in Northern California. The weather wasn't nearly as bad as it has been in past years, apparently, which was nice. We accomplished a lot, including putting the rest of the show on the field. On Saturday of last week we did a full-uniform performance for the community of Angel's Camp, who barbequed for us. Dinner was so amazing that I overstuffed myself before warm-up. It was definitely the best meat I have ever had. 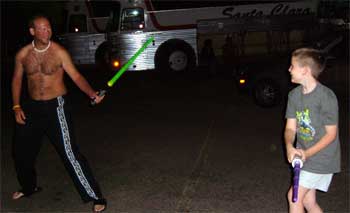 SCV drum major Stuart Schulman (left) battles it out with Nicholas Valenzuela.
After that performance we packed up and on Sunday morning we headed out on our last trip with the Santa Clara Vanguard buses and made our way towards Sanger, Calif. We have spent the entire week at Sanger rehearsing the show and preparing for our first show on Saturday night. Tonight was another full-uniform performance for the local crowd. Tomorrow night we will head out to a new school, at which we will rehearse Saturday during the day before we head to Concord for the night show. Since we have been moved in for almost three weeks, we have been around our fellow corpsmates for a very long time. At times it does get frustrating, but it also gives us a chance to get to know each other very well. We spend a lot of time with people in our sections, which makes us generally have the closest relationships. So far the mellophone line just seems to click, and it makes dealing with all situations much easier. We have a member from Japan, so the language barrier is interesting to work through. Another person I have had a chance to get to know quite well is our drum major, Stuart. This past week when we were in Angel's camp I had the chance to see a lighter side of Stuart, when he was battling our corps director's son with a light sabre. It was definitely a picture-perfect moment. Saturday is the day that I'm looking forward to, as it signals the beginning of tour and the end of all-day rehearsals. I'm also very excited to put this show out in front of an audience in the new uniforms. This is definitely shaping up to be the best summer I have ever had. The days at this point seem so long, but when I look at how far we have come as a whole I realize just how fast this summer is flying by. Already we are done with three weeks of the summer, and now that shows are about to begin it is going to fly by even faster.