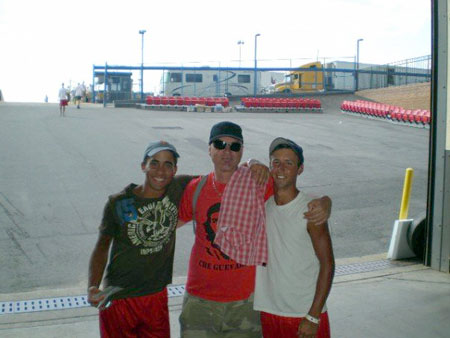 This is a picture from June 30, 2007, at the big show that the Cadets host at Giants Stadium every year. Many Cadets alumni and friends come out to this event and make it magical for the members. This photo is of a legendary giant by the name of Marc Sylvester. He was one of the masterminds behind the Cadets from 1983 through 2006 and taught me most of what I know about the drum corps activity. A great instructor and great friend, Sully (as his friends know him) is the deal.

From the left: Me (Miguel Adorno), Sully, and one of my best pals, Ryan Barry. Ryan and I have been marching as baritone players with the cadets since 2006. Ryan "aged out" last year and I have one more year of eligibility.