By Allison Owen This past week I've seen a lot of WGI DVDs -- mostly the Scholastic World disc.   As I was watching some of the very top guards it was hard to believe that they are all high school students, like myself. I've always found it so interesting that some of the greatest drum corps instructors teach high schools. I mean, they obviously have to have jobs outside of the drum corps realm and why not the same kind of activity, but it's a little crazy to imagine having someone like that as a high school instructor. I've been under the direction of quite a few teachers in my four years of these activities. With all my different band, guard, and corps experiences, my most recent directors -- at school -- have come to mean the most to me. There is just something about them and their gifts for teaching that really get to me. 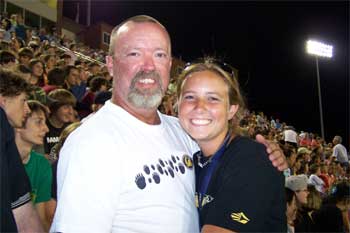 
I changed schools during the early part of the winter guard season last year and ever since then I've come to feel like I've been there all along. Of course in reality, I haven't, but it feels like I belong. Since I've been under other kinds of teachers, I can fully appreciate the capabilities my current guard tech, Tommy, has. I don't think some of my friends completely grasp just how lucky they are. If I had known all the different things the younger guard girls at my school know back when I was their age, I have no idea how I would have handled previous auditions I've had. They are so blessed to be exposed to such great things early on, but I don't think they realize how lucky they are at times. When I auditioned for Spirit two years ago, there were other girls there that were 15 as well. We may have been the same age wise, but our skills were on completely different levels. I remember a few of them being from Kennesaw Mountain High School. My experience after two years of high school marching band and their experience after two years of high school marching band and winter guard were very different. A good example is just doing basics. I had never done anything left-handed in school, I had taught myself to do basics on both hands It's nothing against my teachers, it's that I just didn't know.

I see guards like Kennesaw Mountain, James Logan, Center Grove, or Miamisburg and I can't believe just how lucky they are to have such an amazing staff in high school. In the past year I've been blessed with a very talented guard instructor. I feel very fortunate to have been instructed by Tommy, even if it will only be for a year and a half.

I'm a very firm believe that you are a product of your environment. If I turn out to be anything like my environment, I will consider myself a very lucky individual. In these next couple of weeks as I prepare for yet another audition, I'm going to take a moment to thank Tommy and other people who have helped me recently. Without such great instruction, I don't think any of us would be where we are today. Take a minute sometime soon to thank those who have helped push you to your potential. Even if you aren't in a high scoring Scholastic World winter guard, your staff still deserves a "thank you" every once in a while. Allison Owen, 17, is a senior at Sullivan Central High School in Blountville, Tenn. She was assistant conductor at Southwind, and she enjoys dancing, performing, color guard, writing, English, and having fun. She plans on attending Western Carolina University next fall...