Amidst the wheat fields of northwestern Oklahoma, Alan Mueggenborg fell in love with drum corps. It was in a 4,500-person city, located about 50 miles northwest of Oklahoma City in an area surrounded by wheat fields, grain elevators and not much else, a color guard instructor took the high school freshman to see the Madison Scouts. The Scouts were fresh off a world championship when Mueggenborg saw them during an Oklahoma City show. He was hooked. 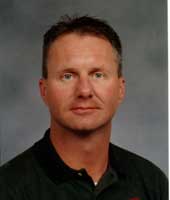 Alan Mueggenborg
"That's what inspired me to become more involved with the outdoor pageantry activity," Mueggenborg said in a phone interview from The Woodlands, Texas, where he is now visual coordinator for the Texas school. ^Mueggenborg is designing drill this year for the Glassmen of Toledo, Ohio. The corps' show is an updated version of Antonin Dvorak's "Symphony No. 9 in E minor, From the New World." It's a longtime dream in the works for Mueggenborg, who's toiled ever since those Kingfisher days working with championship-caliber high school bands and color guards in Oklahoma and Texas. Mueggenborg, who worked for years to keep a Tulsa, Okla., corps afloat during the 1980s and 1990s, always wanted to design drill for a top 12 corps. Early years Mueggenborg was involved in Kingfisher High School's band program until he graduated in 1979. It was there he also gained exposure to the competitive winter guard activity. Kingfisher hosted the state's first contest. Kansas corps sent their winter units to compete, and Mueggenborg saw groups like Sky Riders, Argonne Rebels -- and the Valiant Knights of Enid, Okla. He toured from 1979 through 1982 with the Sky Riders, marching baritone for two years and spending another two years on the rifle line. While attending college at Oklahoma State University, he first began writing drill -- working with the color guard and winter guard during 1980, 1981 and 1982. He spent a lot of time watching old tapes of Drum Corps International and Winter Guard International, trying to come up with ideas and hone his skills. Mueggenborg was hired to teach at Catoosa High School, located in a small town along Interstate 44 about 16 miles east of Tulsa. He joined a staff that included Wes Cartwright (Santa Clara Vanguard, Broken Arrow High School, Union High School) and Dale Barnett (Union High School). Union hired the trio in 1983, beginning a long run of success. Mueggenborg helped the Union winter guard win sixth place at WGI in his first year and finish first the next year. "After winning WGI, the band director said, 'Do you want to try writing the drill? I said, 'Sure.'" Drum corps It wasn't long before Mueggenborg was back in drum corps. By the summer of 1987, he began working with the Tulsa-based Black Gold, having already helped Union win two state titles, a regional championship and a fourth-place finish at Bands of America Grand Nationals. "I'd always wanted to become involved with drum corps," he said.

A year later, he was named corps director and Black Gold won third place in Class 'A', winning the high visual award. Black Gold would break the Top 25 in 1990, 1991 and 1992, a great deal of success for a group that Mueggenborg termed "a new corps in the middle of nowhere." "It was quite a learning experience," he said. "Many people told me it would never happen. I guess I went out to prove them wrong." Mueggenborg said Black Gold was "on the verge of greatness" in 1993 when financial difficulties hit. They wouldn't march that year -- and despite many long hours for several years trying to get the corps back on the field through fund-raising efforts, Black Gold never marched again. "I've always had a love for the activity," he said. "It was really hard for me to see Black Gold go down. It was very hard for me to see that happen after all the work I'd put in and I saw all the lives it helped change." But Mueggenborg's back again. He took a few years off from drum corps, moving to The Woodlands to become visual coordinator for a high school located in a state filled with intense competition. Since then, he's worked to get himself situated to go on tour again. He first became involved with the Glassmen last year as a consultant. Glassmen director Brian Hickman was tour director for the Cadets when Mueggenborg first met him in 1994, and Hickman has pursued him for about three or four years. Mueggenborg, who counts Marie Czapinski and Steve Brubaker among his mentors, has a style that he calls "staging," rather than drill design. "I'm not going to write major effects," Mueggenborg said. "My strength is getting people there when they need to be there. If the focus is trumpets, I make sure trumpets are where they need to be." The Glassmen staff started talking about a show in October, sometimes meeting about twice monthly to talk about colors, programming and effects, said Mueggenborg, who spends about two hours designing a chart "and sometimes longer." He started designing drill during February when the music arrangement was finished and corps members started learning right away. The corps is expecting to have the entire show on the field in June and then begin cleaning. After July 15, they'll start refining show for the championships. "If you're lucky, you don't have that many revisions," Mueggenborg said. "But sometimes, revisions take up the majority of your summer schedule." Mueggenborg expects this summer to be a learning experience, despite his years of experience. But it's good being back, he said. "The drum corps activity changed my life," he said. "I've always wanted to do this -- and this is my way of giving back and participating." Ryan McNeill is a political reporter for The Oklahoman, the state's largest newspaper based in Oklahoma City. He covers the House of Representatives and various state agencies. He marched at Tulsa's Union High School from 1993-1996 and at Oklahoma State University in 1996.