From a Glassmen press release: The Glassmen serenaded hundreds of ticket holders for the Maumee House Raffle last weekend in Maumee, Ohio. The members of the corps made their first public debut Saturday as part of the evening entertainment prior to the actual drawing for the cash prizes. The unique raffle was a joint fund-raiser between the Glassmen and the local Maumee High School Band and Athletic Boosters -- and it was a smashing success! The entire evening was to originally take place outdoors in Maumee High
School's Kazmaier Stadium, and although the weather had eventually forced them indoors, it didn't dampen any spirits that night. The high school band members played for the ticket holders during dinner, and once the festivities moved inside the gym, the Glassmen entered the floor to a rousing ovation. 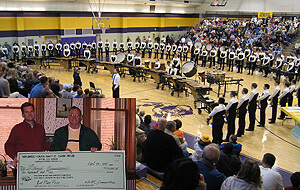 Glassmen members perform for the raffle ticket holders; Brian Hickman presents one of the winners with his check.
Interspersed with a bit of helpful commentary about the corps from director Brian Hickman, the members performed pieces from their upcoming Valentine Theatre performance and the 2005 summer production, "A New World." The members were very excited to be out performing in public this early in the season, and you could tell as they suited up in uniform and polished their instruments before the performance. "But the best part was doing this performance for the community," said Hickman. "Sometimes we spend a fair amount of our tour away from the Toledo area, and it's been great to kick-off our first performance right here at home." The corps was spectacular -- a good sign of things to come! It was definitely a remarkable weekend. Though it may have felt like
December outside, it was mid-July inside G-West, as the sound of the corps heated up rehearsal rooms and the flair of the color guard returned to the gym. Even with the late-season snowstorm that swept over the area during the couple days of camp, the corps was able to forge ahead with some drill and music for the summer. The members will return for one more rehearsal camp in May before they move in for spring training and the Valentine Theatre performance. Then it's off on the 2005 summer tour -- see you on the road!