From the Glassmen Web site: Day 10 - Meerhout, Belgium
July 2, 2006 The last day the Glassmen spent on the continent of Europe was a quick one-day trip through Meerhout, Belgium, a small town of just over 9,000 near the northern center of the country. This is the first time the city has hosted a drum corps show at this level. 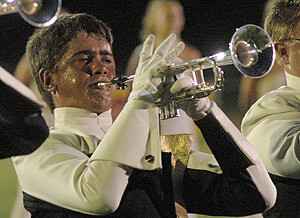 Glassmen trumpet player Youri Debaere is a native of Belgium.
Glassmen return to the United States on July 4. Read more about the corps' two-week European trip on www.glassmen.org.