From a Glassmen press release: The Glassmen were awarded a proclamation from the city of Toledo while on tour this summer in celebration of their 45th anniversary season and in recognition of the corps' first world tour. Denis Hojnacki, volunteer for the corps, was on-hand in Toledo this summer to accept the honor for the corps. 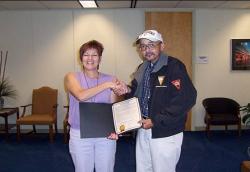 Glassmen volunteer Denis Hojnacki receives the proclamation from a member of the Toledo mayor's office.
The corps was very honored to be recognized by their hometown, and throughout their 45-year history, they have continued to not only bring drum corps members and fans to the area, but bring recognition to Toledo across the country and around the world. The award will hang in the Glassmen G-West Facility with the many other accolades they received on their anniversary tour. Read the proclamation on www.glassmen.org.