From the Glassmen Web site: The Glassmen held their fourth rehearsal camp this past weekend, and despite the cold and snowy weather that moved through the Midwest, the corps managed to begin putting their drill on the field for the first time -- in February! "In February? In the Midwest? But how?" The brass and percussion sections took their first trip into Michigan to work all day Saturday in the Pontiac Silverdome. The covered stadium was practice field host to the Super Bowl Champion Pittsburgh Steelers just the week before, so the corps was able to take advantage of a full day on the new $750,000 turf laid specifically for the "big game" practices. 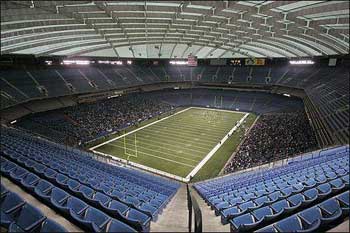