From the Glassmen Web site: Following up a highly acclaimed performance at the Valentine Theatre in 2005, the Glassmen are returning to the stage on May 21 at 3 p.m. to present the 2006 Glassmen Showcase Concert -- 45 years celebrating youth and the arts. The Glassmen Showcase will be held in the brand new state-of-the-art Maumee Performing Arts Center, in Maumee, Ohio. While the Glassmen are the concert headliners, they have several exciting guest artists and events as part of the concert as well. World-renowned percussionist Mark Ford will not only be performing in the concert (both solo and with Glassmen accompaniment), he also will offer a free master class before the concert. The hometown Maumee Concert Band also will be performing at the concert with a special surprise for the finale. 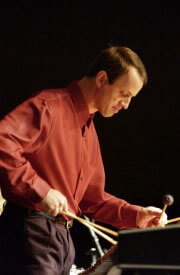 Mark Ford
Read more about the concert and Mark Ford on www.glassmen.org.