From a Glassmen press release: The Glassmen will play as a guest artist at the Toledo symphony's Classic Series concerts on March 5 and 6 at 8 p.m. in the Toledo Museum of Art's Peristyle Theatre. Tickets range from $15 to $40, and are available by calling the Toledo Symphony directly at 419.246.8000 (or 800.348.1253). When you call for tickets, mention that you're coming to see the Glassmen, and 20 percent of your ticket price will be donated to the corps. 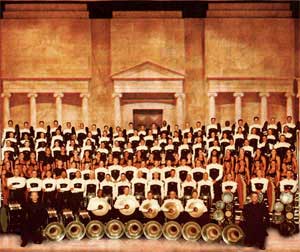 The Glassmen, at the Toledo Museum of Art's Peristyle Theatre.
The Glassmen have had a long history of performances with the Toledo Symphony over the last decade, as well as concerts with several other Midwest symphony orchestras. The corps makes an annual trip to the Toledo Zoo for the Music Under the Stars performance sponsored by the symphony. Both concerts, conducted by Chelsea Tipton II, will also feature the excitement and fire of trumpet virtuoso Sergei Nakariakov, in a celebration of the brilliance of brass instruments that concludes with Respighi's majestic "Pines of Rome," which features the powerful brass sounds of the Glassmen. The concert also includes dance music of Leonard Bernstein, vividly capturing the American musical language of 1943 -- the birth year of The Toledo Symphony. This is a show you can't miss - a drum corps brass "preview" for the true fan! The complete program includes McClure's "Fanfare for the 60th Anniversary," Bernstein's "On The Town - Three Dance Episodes," Mendelssohn's "Concerto in d-minor," Arban's "Carnival of Venice," and Respighi's "Pines of Rome." More details can be found on the Glassmen Web site.