From a Glassmen press release: The Glassmen got their feet on the field for the first time this season during their fifth camp this past weekend. The corps began the drill for the 2005 production, after getting a head start on much of the music for the summer and their upcoming Valentine Theatre concert during the last four camps. 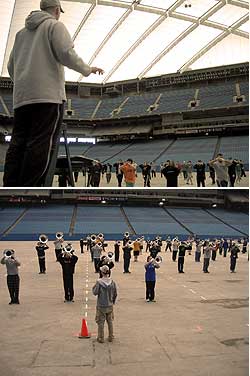 The Glassmen rehearse in the Silverdome.
Ohio is not well-known for its lovely weather in February, so the corps traveled on the buses up to Michigan's Pontiac Silverdome, where they could rehearse indoors under the protection of the dome. The absence of the turf floor didn't bother them - they laid out a field with tape on the concrete. It may still have been chilly indoors, but the fast-paced drill and high energy of the members and staff kept everyone warm during rehearsal. Seven hours later, the brass and percussion had worked through a majority of the opener drill. The sound of the music reverberating through the empty dome brought back images of summer, playing in a stadium full of thousands of cheering fans. The members had a great time working in the Silverdome. "It really feels like the drum corps season is right around the corner," one of the members said -- and it really is! The Glassmen will be busy these next few months leading up to the summer with camps, Monte Carlo fund-raisers and the special debut concert at the Valentine Theatre. You can find out more about these and other events at glassmen.org.