The Glassmen are proud recipients of two very special awards for very special people involved with the organization. 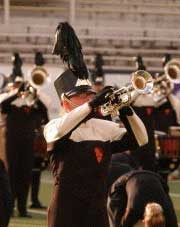 Sara Magalli
The 2004 Chicago Royal Airs Devitt Memorial Scholarship, established through gifts from Dr. and Mrs. Jurgis Karuza and the Devitt Family, was awarded this year to Glassmen veteran member and trumpet player, Sara Magalli. ^The Chicago Royal Airs award this scholarship annually to two horn players with a competitive junior corps in the Midwest that demonstrates respect and enthusiasm for the drum and bugle corps activity. The recipient must maintain at least a C average in his/her schoolwork, and demonstrate financial need. "This gift allows the Chicago Royal Airs to show its unwavering support of today's young people who participate in an activity we all love and would like to see continue," said Royal Airs Board President Carmelo LoGalbo. Ethel M. Devitt was, according to her family, the "world's most ardent drum corps fan." She passed away in 1988 and was the wife of Donald G. Devitt, founder, manager and president of the St. Michael's Chi-Angels, cofounder and manager of the Chicago Spartans, and an assistant manager with the Chicago Royal Airs. The Glassmen also garnered top honors this weekend at the DCI Central Division meeting for the "Best DCI Central Division Competition" award (shared with Menomenee, Wis.) for the annual Glassmen All-Star Review competition held in Toledo, Ohio. Stay tuned to DCI.org for more details about the Central Division awards. This year, the All-Star Review celebrated its Tenth Anniversary, and they certainly pulled out all of the stops! Committee co-chairs Kim Owens and Mary Ellen Kerber helped make our great event even better by bringing in a record number of students for the Entertrainmnent Clinic in the afternoon, as well as feeding (and entertaining!) all the students and directors before the show. A sponsor marketplace was established near the annual Glassmen Alumni and Family reunion area that allowed attendees to peruse products and catch up on alumni happenings, all on their way into the stadium for the competition. The atmosphere was really exciting! Raffles, drawings, music, and entertainment filled the scene from noon until midnight - setting the stage for the next All-Star Review on June 18, 2005, to be even bigger and better! Thanks and congratulations to Kim Owens and Mary Ellen Kerber, as well as Fred Mehrer, Rob Cintron, Rod Owens, Marsha Thatcher and Lori Beck for working together to achieve the "Best Show in the Midwest" award. Here's to next year!