From the Glassmen Web site: The Glassmen officially wrapped up the 2006 season at the beginning of September with their annual banquet and awards dinner. The evening included dinner, video and photos from the 2006 season, as well as award presentations to members, staff and volunteers. Over that weekend, the corps' alumni association also hosted a picnic and party at Maumee Bay State Park. There, members had a chance to casually meet up again and share stories, while meeting and reminiscing with alumni and other families within the organization. Read more about this celebration, and check out a list of 2006 Glassmen award winners at www.glassmen.org. 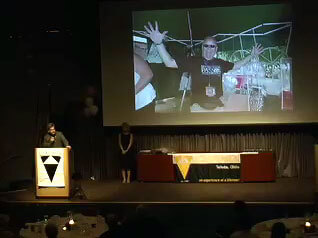 Glassmen Executive Director Brian Hickman presents a Volunteer of the Year Award to Vivian Whittaker who was unable to attend the corps' annual banquet.