By Allison Owen So that time comes when one has to say goodbye to everything he or she knows. This is the time of year when schools across the country bid their seniors farewell. It's also time when those certain individuals say goodbye to the "normal life" and move in for the summer, not even realizing that it will be a life-altering experience. Before I say my goodbyes, I must say that I've had an interesting few weeks. When I last wrote, I had no idea of what would soon follow. A couple weeks ago I left the corps that I thought was my home. It was not the easiest decision, but indeed it has proven to be for the best. (I'm sure you are re-reading that to make sure I really said that, and yes I did.) 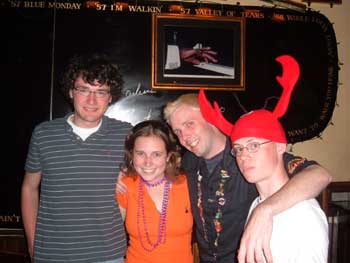 (L-R) Taylor, me, Aaron (our Cavaliers waiter) and Devin. Taylor marched Crown '04, Aaron marched Cavies '02, and Devin marched Crown '04-'05.
Because I came to such a choice, I had to deal with the consequences and I was ready to face them. Soon I found myself wondering if I would be marching this summer at all, or just watching from the stands. I began to e-mail corps directors to see if their corps had any holes or whatnot. It was not the most enjoyable thing to do, knowing that I might not get to march. Now before I go on, let me explain yet another dilemma. My left knee has been swelling randomly and it often hurts to put any pressure on it. When I'd go to do a leap in guard, sometimes I would land and it would give out entirely. It was just not something that could be taken lightly with the extreme nature of corps. So my normal routine was changed. This limited my options for what I could do during the summer. The doctor has been completely baffled by my knee for quite a few months now and could not figure out what it was. Just this past week another doctor came to a conclusion that I have severe tendonitis in my hamstring. So this limits my abilities slightly, but hopefully when I get home in August more can be done to make it more bearable.

Back to the corps situation. After what seemed like a very long time -- which was actually a matter of a couple days -- I was invited to attend Southwind's rehearsal camp and see what I could or could not do. So I went out to Winchester, Ky., not sure of what would happen.

When I arrived at the school my knee was already swollen -- I hadn't done anything at all yet. I was very frustrated, but after discussing it with corps director Mike Loeffelholz, I was offered an assistant conductor position. After my weekend in Winchester I can officially say that I am happy to be a member of Southwind for this summer.

On Friday I head off to London -- Kentucky, that is -- for everydays and then it's off on tour. I'm very excited about this opportunity and I'm really looking forward to it. The other night I went to Wal-Mart for my tour necessities run and spent a nice amount of money getting ready for another summer of corps. It's going to be a great one.

I'm really looking forward to spending my summer with Southwind as they have so graciously offered me a home. Everyone seems really nice and welcoming and the show is going to be awesome. So if you happen to get a chance, do come check us out!

Before I say my goodbye to you for the summer I must share a story I meant to share weeks ago. I went down to New Orleans with my band for our spring trip and it was a really fun time. One night we went to the Hard Rock Caf?©.

Well, the jazz festival was going on at the same time, so our waiter asked us if we were there for the Festival and other things of that nature. When he found out that J-Bob and Taylor played the trumpet, he got this huge grin on his face and was like, "I play trumpet too ... If you ever get the chance, you should march drum corps."

Taylor and I looked at each other, back at our waiter, and then back at each other and said, "Yeah we did that." It was one of those surreal moments where you don't really think something like that could actually be happening.

After random corps talk we found out that our waiter marched the Cavaliers in 2002. Now I don't know about you, but I can honestly say that has never happened to me. It was just so weird and random -- yet totally awesome -- that our waiter knew what drum corps was, not to mention that he had marched a year and won.

I promised Aaron that the story and picture would be on DCI the following Monday. Obviously I was wrong, so I apologize to our cool Cavalier waiter from New Orleans.

And now I must bid you all farewell as I head off to Kentucky. I still have a lot of packing and preparing to do, so I should get to all of that. Best of luck to all of those competing this summer, and thanks to all those who help make it possible. Goodbye normal world, hello drum corps. Allison Owen, 16, is a junior at Sullivan Central HS in Blountville, Tenn. She's in her second year in the Memphis Sound guard and enjoys dancing, writing, English, guard, photography, having fun and performing. For college she would love to attend the University of Oklahoma and major in journalism or English; however, she'll probably end up at the University of Memphis for in-state tuition's sake.