Marc Sosnowchik of Birmingham, Ala., sent this photo. 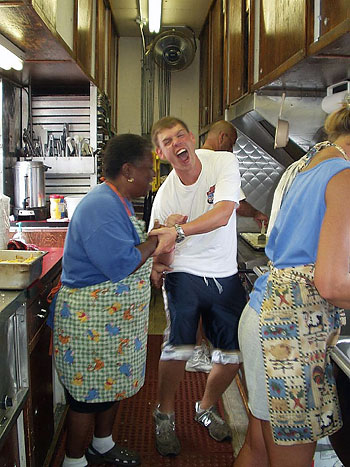 I was fortunate enough to tour with Phantom Regiment for a month this summer as a cook, and it was some of the most fun I've ever had. I never marched in a drum corps, but have always been a Phantom Regiment fan. This would be my age-out year if I was a marching member. Everyone at Regiment was most hospitable to say the least. I am honored and thankful to have been involved in their 50th anniversary season!

Nadine, one of the other cooks, caught this picture of us goofing off during a rehearsal day in Akron, Ohio at the Rubber Bowl. That cook crew (Gail, Robert, Bryan, Dieter, Barb, Nadine, Lee, etc.) is amazing, they love the corps, and have an absolute blast.