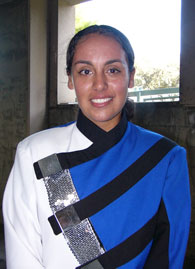 Marina Herrera
"I have gained a new family after being in a drum corps. The people that I've marched with are people I know will be with me for years and years to come, and I'm looking forward to coming back and seeing how they've grown." - Marina Herrera, Blue Devils B mellophone player "Our last show felt great and it was just awesome. I could really feel that all of our corps members were totally into the show." - Lucas Hanson, Blue Devils C drum major "The season has been amazing. I couldn't have asked for anything more for my age-out year. We came from almost nothing and built it up to become one of the best drum lines I've ever been a part of. I'm extremely thrilled and honored to be a part of this drum corps." - Milika Stepasiuk, Citations snare drummer "It's sad for me to be aging out of drum corps because I've had so many great experiences here. Drum corps has changed me and made my strong values better like my work ethic and my respect for others. You really don't know how far you can push yourself until you do this; it's just a great activity." - Tyler Lesperance, Dutch Boy tenor player "It's sad right now, but I think I'm ready. I've been doing this for a while and I've put a lot of work into this and it's been a great feeling to see it all payoff." - Lynette Smith, Fever guard captain 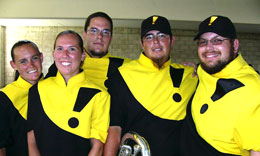 Impulse age-outs
"Our entire corps left everything we had on the field. Gold has grown so much this year and I don't think we knew we would get this far for our first year going to finals. Everybody in this corps went out there and gave it their all and it's going to be very hard to leave that." - Vanessa Pon, Gold drum major "I left every emotion that I've had this season out on the field. It was the best performance of my life." - Steven Secula, HYPE tuba player "Everything we've worked for has really paid off this season. It's been hard sometimes especially because this is my last year, but I'm really glad we put so much effort into our show and season to make it what it's become." - Josh Levitt, Impulse contra player "It has been a great opportunity to lead such a great group of people this year and I couldn't ask for a better corps to be aging-out with. I can't even begin to express how much I love everyone here; we've all worked so hard and this corps doesn't compare to any other group I've marched with." - Lauren Gulino, Jersey Surf drum major 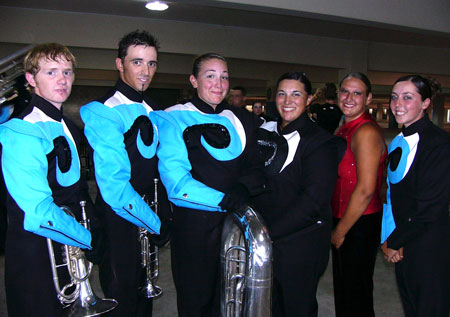 Jersey Surf age-outs
"There's nothing better than marching in a drum corps and I'm really thankful that I've been able to do this. The entire drum corps experience has been incredible and I couldn't have marched with a better group of people or a better organization." - Will McAlister, Memphis Sound tenor player "This season has been amazing. Our color guard has been doing well and the corps as a whole has grown a lot this year. We've stuck together through challenging times and we've been able to come out strong and have a great time this season." - Cassandra Hawkins, Mystikal color guard member 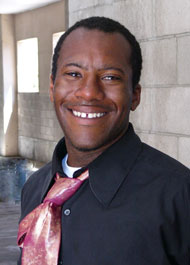 Brandon Rogers
"I'm really glad to be aging out with the Oregon Crusaders because here, I learned about integrity, dignity, hard work and strength; things I can now use in my every day life. Being in a drum corps has taught me to take whatever I get and make the best of it and to keep a positive attitude even through tough situations." - Sarah Butler, Oregon Crusaders contra player "We did a wonderful job at our last show and it was all I could have hoped for. Everything that I've done throughout high school and my five years with this corps was left on that field; I left a piece of me out there and I left my heart out on the field." - Brandon Rogers, Racine Scouts color guard captain "This organization has made me who I am and has made me stronger mentally and physically. It's taught me how to really perform and how really emote, which is sometimes difficult to do as a front percussionist." - Dave Peterson, Raiders pit member "I'm going to miss the people and all the rehearsals that made me work so hard to get better. I've made a lot of friends that I never would've made without this great activity and I'm so thankful for that." - Jessica Zawacki, Revolution mellophone player 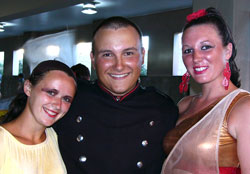 Spartans age-outs
"I've made a whole lot of good friends and great memories from this activity that I'll have with me for the rest of my life." - Jaclyn Brown, Spartans color guard member "Our last performance was really good and probably our best of the season. I really loved playing this year's show; it was some of my favorite music." - Luke Brooks, Spirit of Newark / New Jersey trumpet player "Our last show was great. There was a lot of energy and it was definitely our best show of the whole season. Everyone gave a great show not just for themselves or the crowd, but for each other. It's going to be hard to let go of this group and things are very emotional right now. This was just a great season to end with." - James Haynes, Spokane Thunder trumpet player "There are so many lessons that I've learned from marching. There are challenges physically, mentally and emotionally, and it's how I've chosen to deal with those things that has made me a better person. I have really learned a lot about who I am through drum corps." - Kyle Myers, Teal Sound mellophone player 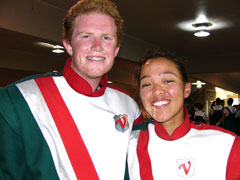 Vanguard Cadets age-outs
"I really learned a lot about leadership this year and our corps has come a long way. Our show really marked the development of our corps since we didn't start out at the top of our game; we have certainly ascended this year and I'm very proud of the corps and everybody I marched with." - Greg Messa, Vanguard Cadets battery percussion captain "I couldn't think of a better place to age-out of than with the Velvet Knights. The people here are wonderful and just great to be with." - Alaric Albiso, Velvet Knights trumpet player "My drum corps experience has taught me to push myself to become an overall better person than I thought I could be." - Daisuke Sugiyama, Yokohama Scouts snare drummer Interviews by Christina Mavroudis-Dempsey.