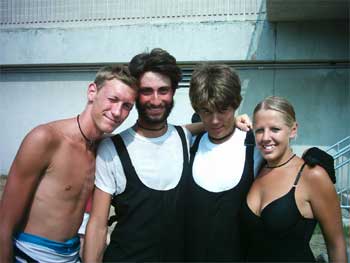 Tom Delgado, who marched his second year in the Jersey Surf color guard last summer (an pictured left in the above photo), submitted this one. "This is a picture from after Division II & III Grand Finals of me and three of my best friends in high school: Dan, Kenny and Sara. I marched Surf in '04, and brought the three of them with me for '05. Often, people who bring their friends from school into the marching activity drift apart, but this summer strengthened our friendship in a way I didn't think possible. Sara is the one who introduced me to winter guard after being in the marching band as a clarinet. Kenny was a clarinet player with me for two years before he learned how to play tuba, and marched in Surf as a contra. Dan, oddly enough, had never marched before this year in marching band and took the dramatic leap to being in Surf. It was a great summer with some great people." Thanks Angie! E-mail your best shots from the summer to dave@dci.org along with where and when the photo was taken. Send some biographical information about yourself as well. We'll give you full credit. Also, let us know if you want your e-mail address included.