One of the giants of the development of drum corps marching percussion instruments passed away at the end of March after years of declining health. William F. Ludwig II, known to many as "The Chief," is the son of the founder of Ludwig Drum Company and its former president. He was 91 years old. 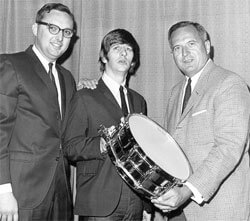 Ludwig II (R) with Ringo Starr and Ludwig director of
marketing R. L. Schory (L). ludwig-drums.com
Made famous as the name-brand drum set played by Ringo Starr during the Beatles' first television appearance on "The Ed Sullivan Show" in the '60s, the Ludwig Drum Company also played a major role in the development of marching percussion instruments for drum corps during the formative years of Drum Corps International. The company is even responsible for building the DCI World Championship traveling trophy, and up until a few years ago, hand-crafted the smaller individual trophies awarded to champion corps. Ludwig II had an affinity for the drum corps activity, working with percussion arrangers and instructors like Drum Corps International Hall of Fame member Dennis DeLucia as clinicians and endorsers of Ludwig products. "Bill Ludwig believed strongly in the value of drum and bugle corps and rudimental drumming," said DeLucia. "He and his father, founder William F. Ludwig Sr., were instrumental in creating and maintaining the National Association of Rudimental Drummers (NARD), a loose organization of military band, drum corps, and fife and drum corps drummers." In 1974, DeLucia collaborated with Ludwig bringing the company's "Vistalite" series to the Muchachos—drums that were well-known for their distinctive see-through acrylic shells. The company also produced early marching bell and xylophone sets, drum carriers and heads, and other accessories. "This experience was my first relationship with a drum company, and I am eternally grateful to Bill and the Ludwig Company for what they did for me and for the entire drum corps movement," said DeLucia. 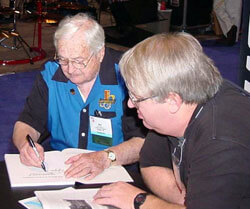 "The Chief" with DCI.org's Michael Boo at the
Percussive Arts Society International Convention.
DeLucia also credits Ludwig for starting a series of educational clinics which he says were elevated to a professional level under the direction of a full-time education department. Over many years, the company also created a wide-array of educational materials including instructional manuals specific to drum corps and rudimental drumming. In the early 1980s, Ludwig II sold his company to Selmer Musical Instruments. He still attended trade shows, representing the company until two years ago. "The Chief" is survived by his son William Ludwig III and daughter Brooke Crowden. A memorial service will be held on Saturday, April 19 at Grace Lutheran Church in River Forest, Ill. View a photo gallery of some of the earliest instructional manuals from the Ludwig Company. Gallery courtesy of the Jersey Surf historical archive. Read Ludwig II's obituary on ChicagoTribune.com