As Paula Hyman mentioned yesterday, Wal-Mart is probably one of the few places that are like heaven on earth while on tour. This store has the perfect schedule and prices for any drum corps member. Unfortunately though, a Wal-Mart isn't always close enough or in the right direction, so similar stores are sought after to provide corps members with enough provisions to last for another two weeks or so. 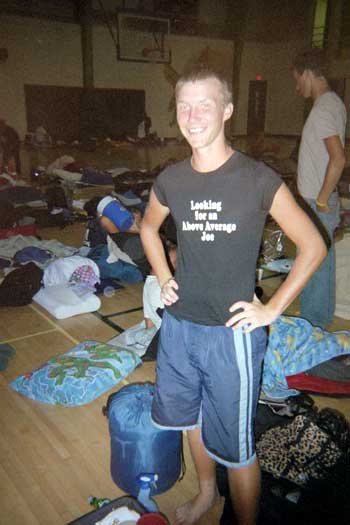 The shirt
This past summer while we were in Ohio, we found out that we would be doing a grocery stop after the show. These days always seem like holidays, because everyone is excited to finally be able to stock up on junk food and other necessary items. Like everyone else, I was very excited because I was pretty much out of everything in my stockpile of food. When we pulled into the parking lot, though, we found out that we wouldn't be stopping at a Wal-Mart, but rather a regional Wal-Mart-esque store. They had everything that a Wal-Mart has but the prices were probably not as low. As with every grocery stop, the second I stepped in the doors I felt as
though I was a kid again. Every shiny object grabbed my attention, and I believed that I could not survive without buying ten times more than I really needed. After grabbing the essential fruit snacks and Gatorade, my seat partner, Beatty, and I headed off to wander the store to find everything that we didn't really need to survive. While walking through different aisles a shirt caught my eye. If shiny objects could grab my attention, then I was a puppy dog looking in a mirror. After noticing all of the humorous catch phrases on girls shirts, the letters on one black shirt gleamed in front of my eyes. In shiny letters, the shirt said "Looking for an above average Joe," and since my name is Joe, I decided that the shirt was a must. After buying the shirt, it ended up sitting in my suitcase for a month without any use. Then one night at the end of July on our way down to
Murray, Ky., I decided that I would wear the shirt, since we were going
to have a dance party. The shirt grabbed a lot of attention, but after some serious consideration I decided it would be best if I retired the shirt. So after the season I gave the shirt away to one of my female friends who would be much more likely to wear it. So you never do know what you can find that would be a trivial, yet funny, purchase during a grocery stop.