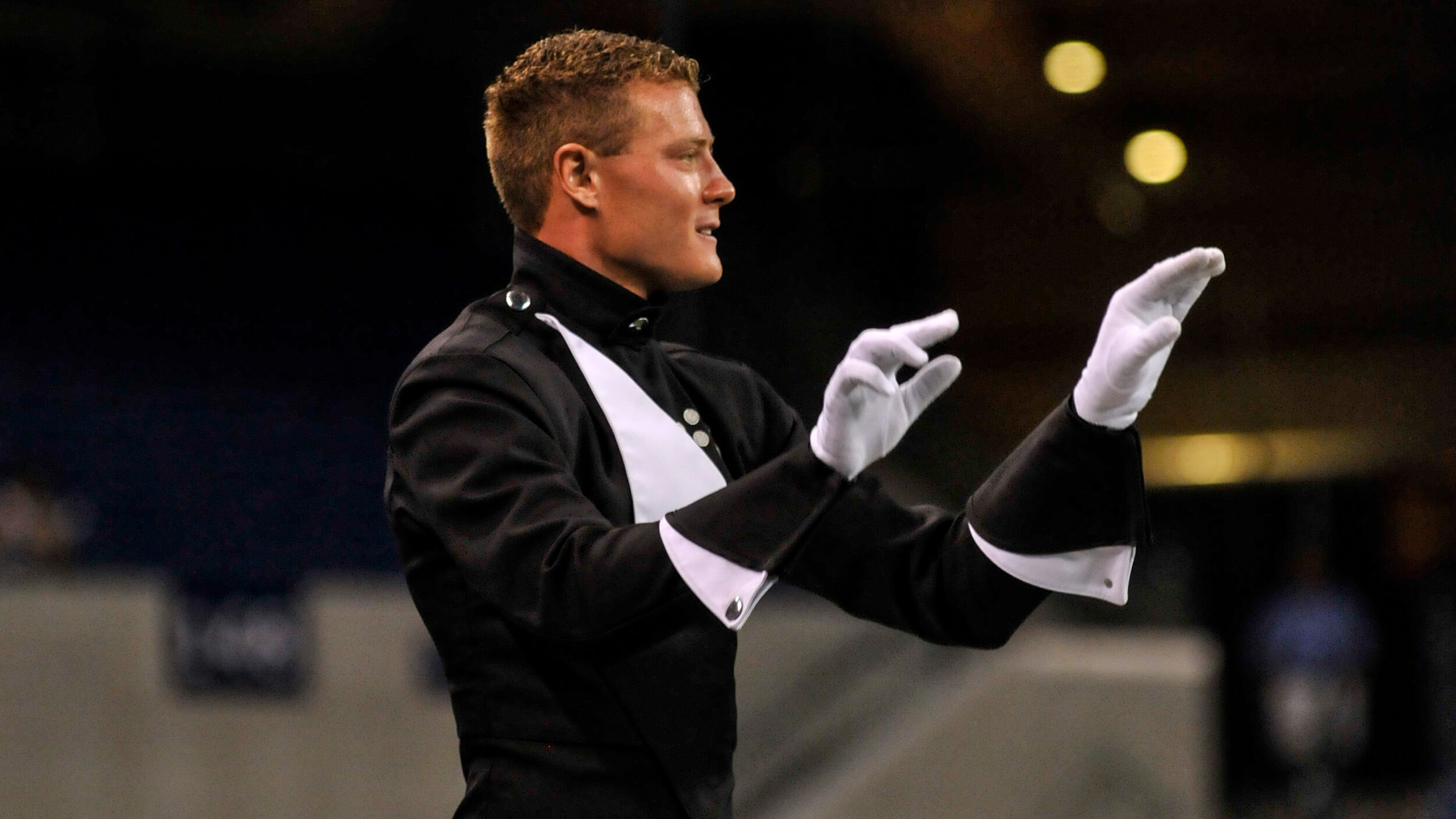 Jordan Helwerda served as a drum major of the Blue Knights from 2008-2010.Photo by: Drum Corps International 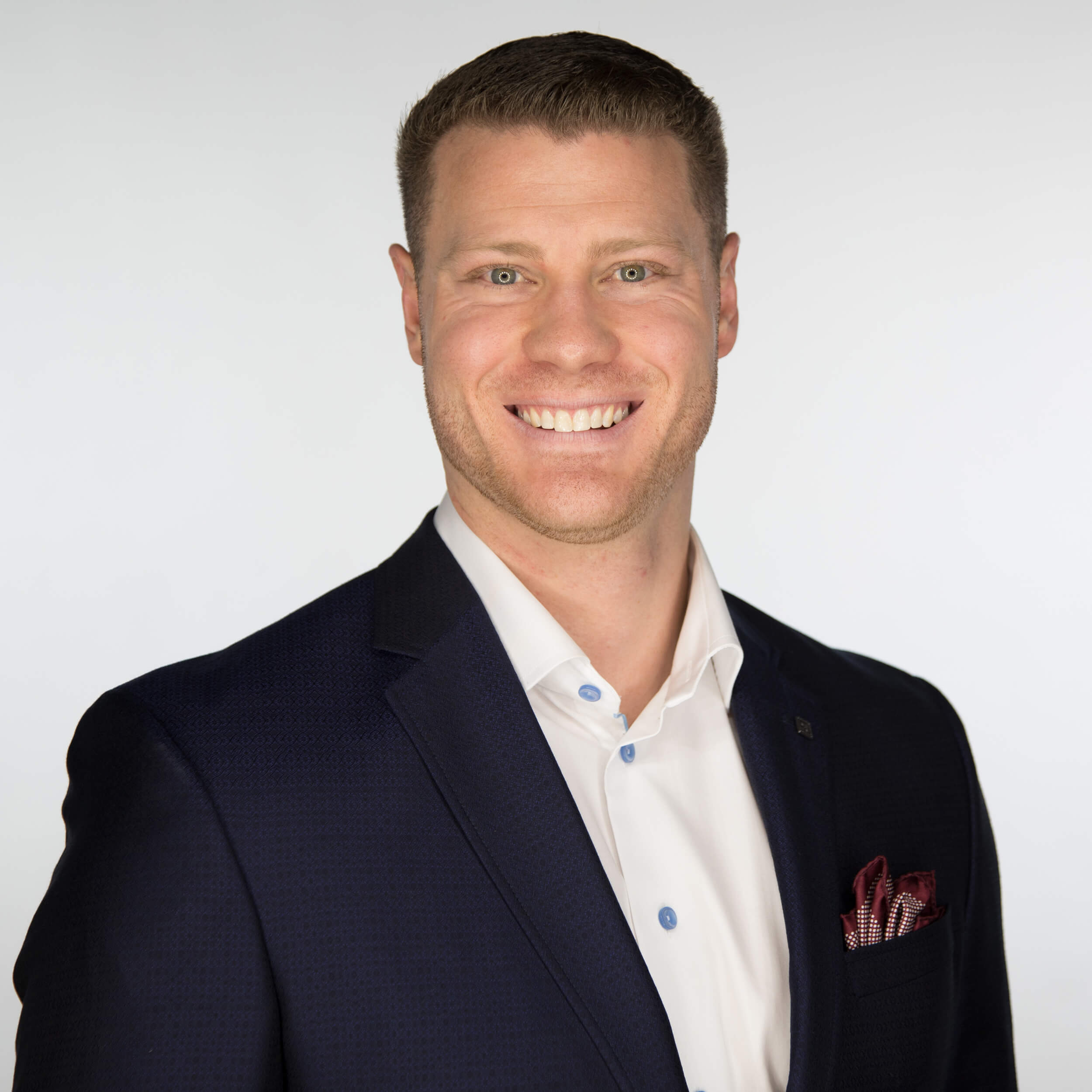 The list of U.S. cities that serve as direct-flight destinations from Calgary, Alberta is, in a word, abbreviated.

But Denver’s one of them. That was all the reason Jordan Helwerda needed. That’s more or less how he found the organization of which — as of just a few short weeks ago — he now sits at the helm.

The Blue Knights appointed Helwerda as executive director on January 15. But as of 10 years ago, he was still a member of the corps, preparing for his third season and second as head drum major.

Two years before that, though, Helwerda was getting ready to make the leap into the drum corps activity, which meant crossing country lines into any number of participating DCI organizations.

The flight from Calgary to Denver was pretty much the only contributing factor he mentioned when it came to his decision as to where he’d march. To be fair, his older sister did spend one summer with the corps in 2007, but it was essentially the travel that led Helwerda’s family to the Blue Knights organization.

“It’s one of the only drum corps you can get to from Calgary that’s a direct flight,” he said. “You start thinking about California or going out east, and you’re talking about multiple connections.”

Helwerda’s experience with marching music prior to Blue Knights was, in a sense, very localized and very unique to what American music students may be used to. 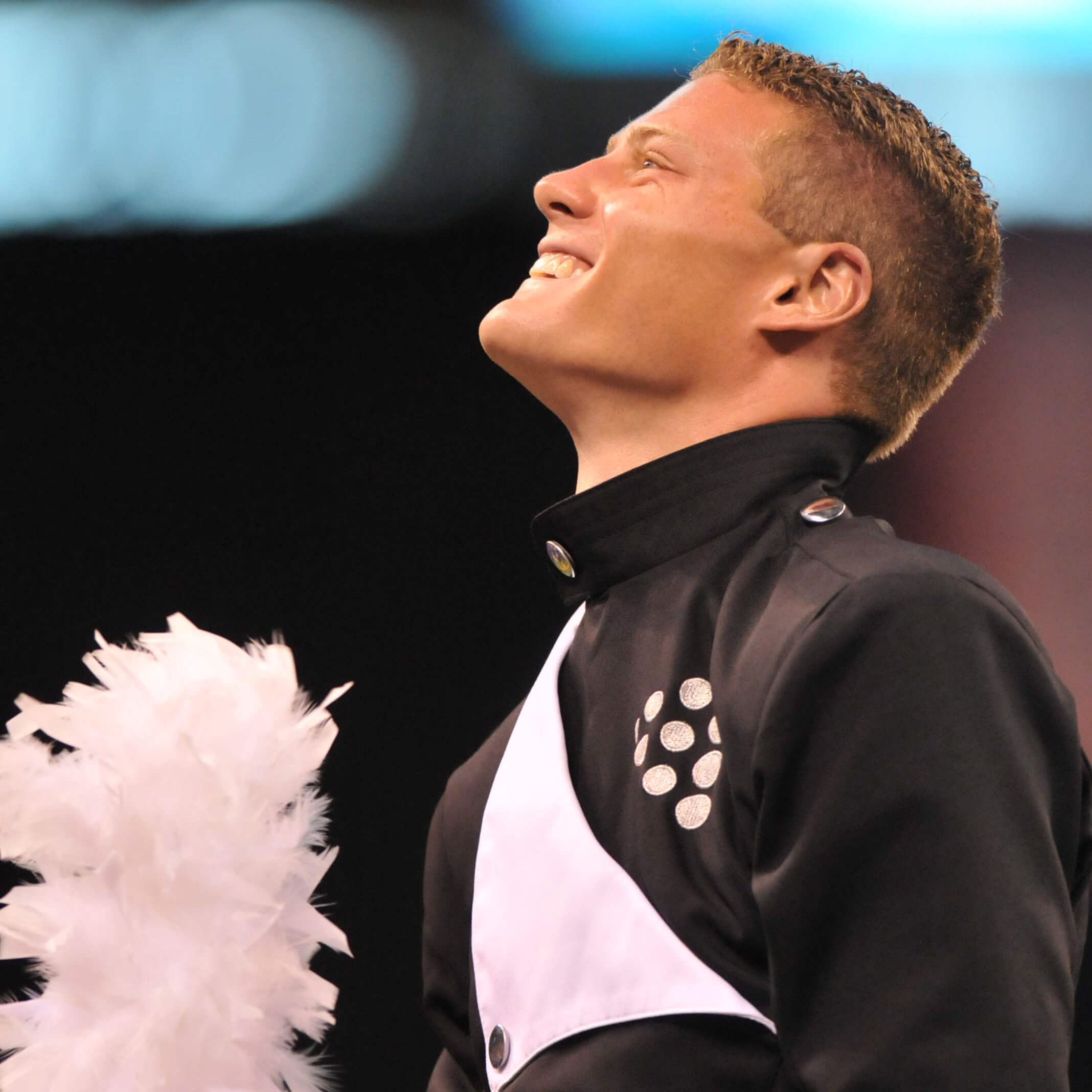 Helwerda with the Blue Knights in 2010

The way he described the marching arts in Canada is centralized to two parts of the country; there’s a pronounced winter guard hub in Quebec, and there’s a small handful of marching bands in the Calgary area at are quite sizable.

But there’s four of them.

Case in point, he had very little hands-on experience with the full depth and scope of the marching world before joining the Blue Knights.

“Not really knowing a lot about the activity, I was kind of taking a shot in the dark,” he said.

Even so, Helwerda’s first year with the corps in 2008 — which he spent as an assistant drum major — went above and beyond his expectations, and led him to return for the following season.

The summer of 2008 revealed something to Helwerda, however. This organization — further, this activity — had a lot of potential for growth. There were improvements that he thought could be made.

And 2009 was his chance to begin having that impact.

Helwerda became the head drum major in 2009 and during that time, he had the opportunity to learn the ins and outs of his own organization and the drum corps community at large.

“All I knew was the Blue Knights,” he said. “After my first year of being an assistant drum major and being in the background and being able to analyze the organization a little bit, I used my next two years as, ‘Okay, this is now my opportunity to effect positive change.’”

After aging out, Helwerda’s professional career took off. With a degree in economics from the University of Calgary under his belt, Helwerda broke into the real estate industry, and, over time, developed a successful company. 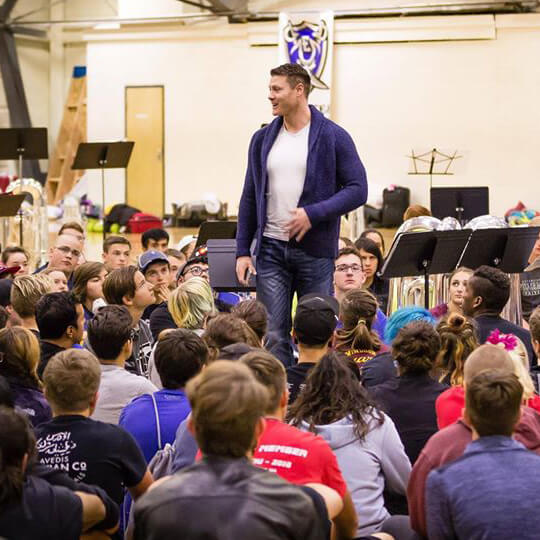 In 2015, though, time opened up for Helwerda to pursue more of his “passion projects,” and in turn he became the corps’ assistant director.

None of that would have been possible if it weren’t for what he experienced during his three years a student leader with the Denver corps.

“I really saw drum corps changing,” he said. “I really saw the Blue Knights needing to modernize and become a little bit more sophisticated. Being a small part of that change was a lot of my motivation for staying involved.”

“It’s been absolutely fantastic to have a mentor like Mark still around in the organization,” Helwerda said. “When you take a look at a lot of other people who are taking over drum corps, it’s because someone else has left; they’re filling the shoes of someone who’s left. The benefit for me is that Mark’s still there. He’s still there in such a big role, so having that ongoing mentor relationship has been fantastic.”

His aim, moving into the future, is to continue building the vision for Blue Knights that spawned in his brain as many as 10 years ago — one of an even more modernized, structurally-sound, member-oriented, dynamic and successful organization than that which already exists in Denver. 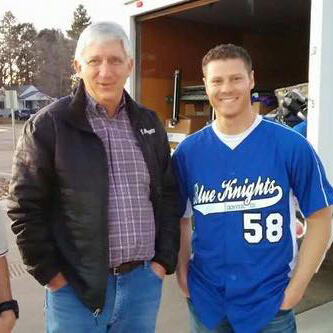 To do that, he and the organization have their fair share of ideas. A few of them have already taken shape, like the hiring of a director of member experience. The hope is to create similar positions in the future, in order to re-imagine what drum corps can be and how it can be done, from an organizational standpoint and beyond.

“As time has gone on and we’ve become more sophisticated, I think we’ve just needed more people in the fold,” he said. “Hopefully, moving me into the executive director is making room for more people to come into the organization as well. That was the goal.”

“We’re going to bring good people into the organization,” he added. “We’ll figure out what they do later.”

But, for Helwerda, that kind of thing is just one example of his vision for the bright future of Blue Knights.

That kind of thing is just the beginning.

“I definitely have a desire to put my own stamp on the organization,” he said. “Hopefully that can be a positive stamp.”

Read up on the latest features and updates from DCI alums around the world! Subscribe to the monthly DCI Alumni Newsletter. Have a story or an update of your own? Contact us today!