From a Glassmen press release: The Glassmen just completed their third camp this past weekend, wrapping up auditions, and continuing work on the 2004 production. With nearly five minutes of the musical program completed, the brass and percussion sections worked long into the cold nights, then heating up the Sunday afternoon show-and-tell crowd with two hours of straight in-your-face drum corps sound! A lot of hard work goes into these camp weekends, but things always run smoother with the help of the 2004 Glassmen drum majors, Matt Hensley and Jeff Mlakar. 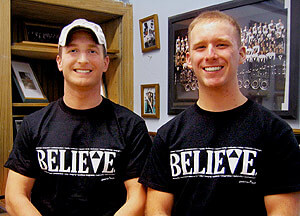 Drum majors for the 2004 GLASSMEN are Jeff Mlakar (left) and Matt Hensley.
New on the podium, Mlakar is beginning his third and final year with the corps. Originally from Lyndhurst, Ohio, he currently attends the University of Michigan, where he will be graduating this December with a double degree in mechanical engineering and computer science. "The level of class and quality of individuals at the Glassmen has always made me proud to be a part of the organization," says Jeff, "an organization which has never stopped making me a better person." He is very excited about his new role as drum major, and looks forward to serving the corps in what is sure to be an incredibly exciting year. Joining Mlakar will be Matt Hensley, in his third year as drum major with the Glassmen. Hensley, a public administration major at Miami University of Ohio, is enjoying his time as drum major with the corps, although he admits it is also a lot of hard work. "The Glassmen family is such a great place to come learn, challenge ourselves, and make some really great friends," says Hensley. "To be a part of an organization that constantly asks us to think critically about what we bring to the table as individuals and how it relates to the big picture -- it's truly a one of a kind opportunity."