From a Glassmen press release: Matt Hensley and Bo Sodders, both from Ohio, will share the Glassmen podium in 2005, and lead the membership through an exciting year for the corps. 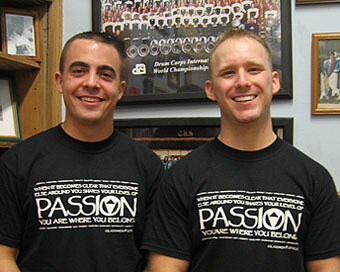 Bo Sodders (left) and Matt Hensley.
The drum majors at the Glassmen have many more responsibilities than just conducting on the podium. They are expected to be leaders within the organization as well as role models for the corps and throughout the activity. Their efforts teach them not only about music and marching, but working across teams of people, time management, and social and leadership skills that they can use throughout the rest of their lives. This role has certainly made an impact on 21-year-old returning drum major Matt Hensley, who is also studying public administration at Miami
University of Ohio. "I aspire to always try to make myself a better person," he said, "and by focusing on that, I hope to help people around me realize some of their inner potential. Later in life, I'd like to be able to look back and think that I've made a difference somehow, for the better - and long after I'm gone something I may have done to help someone in some small way will convince them that at some point, they should give back to others as well. " Hensley summed up why he continues to return to the Glassmen year after year (this is his fifth and final year with the corps). "Being a part of an organization that grounds itself in the education and development of the individual has played a very large part in how I see the world. Each year I'm challenged in new ways. I have never walked away feeling like I haven't personally accomplished something - I've always grown as a person. It's a great feeling to go somewhere where the opportunities are endless! " Bo Sodders, a 20-year-old student at Bowling Green State University, started with the Glassmen playing soprano in the horn line. He is
majoring in music education, and looking forward to getting a masters degree and becoming a high school band director. This will be Sodders' fourth year with the corps, and his first as drum major. "I am with Glassmen because this organization is something unlike any other organization I have been associated with. I have the opportunity to be with some of the most amazing people, staff and members, and have learned so much from being around them. I come back year after year because we have a work ethic like none other. We work hard and have fun, accomplishing things people never thought were in reach, and in the end we are a giant family, with friendships that will last a lifetime. It's great to be a Glassmen!" "For anyone that has any interest in drum corps," Sodders added, "I encourage you to reach out and grab your dreams. Drum corps is an amazing experience, whether at the Glassmen or any other drum corps, and you will never forget what you have learned. Working hard, playing music, drumming, spinning, marching in front of thousands of fans, and great tan lines ... can't ask for much more!"