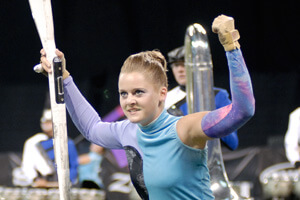 Blue Devils B
It was a show of flips and firsts – corps switching places and achieving historic placements. Sixteen Open Class corps stepped up to their first shot at the Lucas Oil Stadium stage during the Open Class World Championship Semifinals, Aug. 13, 2010 in Indianapolis. At the end of the Semis, four corps had made it into Open Class Finals competition for the first time including Colt Cadets, Music City, Forte, and Genesis. The revitalized Spartans, who staged a heroic comeback this year, jumped right back into the Finals and a potential medalist position. Two new corps Genesis and Forte, both from Texas, have the distinction of making the Finals in their inaugural seasons. In a trio of flips among the standings, Music City moved ahead of Raiders, Genesis broke a Quarterfinals tie with Forte, and Legends topped 7th Regiment. Blue Devils B (1st, 96.4) are within a breath of taking their second straight World Championship title. The corps took all captions except for color guard, which was three tenths of a point down to the Spartans' first place section. 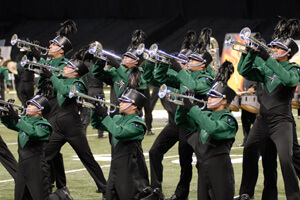 Oregon Crusaders
"Everyone did really well this afternoon," said Blue Devils B color guard member Olivia Hansen. "Sometimes you can just feel it out on the field when everyone is connected." Since winning the Division III Championship on their first try in 2004, the Oregon Crusaders have never placed higher than 4th. Scoring a 92.75, they are now in 2nd place. "Last year we got to Finals Week thinking we could have done better," said third-year Oregon Crusaders tuba Brian Beck. "This year we have pushed it through to the end. The enthusiasm in the corps is way up and the talent level is amazing." Beck says that no matter where the corps ends up after Saturday's final competition, this is only a starting point for all the corps hopes to achieve. "In the next few years it's going to get bigger and better [for our corps]." Backed by a powerful color guard, Spartans (3rd, 90.35) broke 90 for the first time this season, having added a tag ending to their production "Fire Dances." Revolution (4th, 88.05) is more than two points behind but sitting in a strong competitive position. 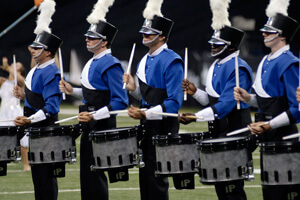 Raiders
The Nashville-based Music City (5th, 86.40) will be making its very first World Championship Finals appearance on Saturday in its sophomore year as a DCI corps. Though falling one position below Music City from the Quarterfinals, the Raiders (6th, 86.00) are looking forward to regrouping and putting on a strong performance at the Finals. "We're ready to throw down!" said tenor drummer April Schuppel. "I know the whole corps is ready to have a good time and have a good show tomorrow. The end of the season is coming and it's also really sad because this is our family, and we've been together for weeks." Also swapping placements from the Quarterfinals, Legends took 7th place over 7th Regiment. And breaking a deadlock between the two new corps from Texas, Genesis (9th, 82.00) went three tenths of a point above Forte (10th, 81.70). Robert Flores, Genesis Director of Education, said: "These kids are amazing considering that we're not even one year old. It's been a quest since November: getting these kids together, to see our musical vision through the music. For 90 percent of these individuals, it was a first time experience for them in Lucas Oil Stadium. … I think we're in good shape for tomorrow."

Colt Cadets
With an 11th place finish, Colt Cadets (81.55) have earned a spot in the World Championship Finals for the very first time, with Velvet Knights (12th, 76.65) capturing the last spot to compete in the Open Class Finals on Saturday. The Racine Scouts capped off their season at the Semifinals with a score of 74.50, good enough for a 13th place finish. Brass instructor Kris Neil, who has been a part of the Racine Scouts organization for 20 years, said the corps' Semifinals performance was "right up there with Quarterfinals." "At this time of the year, everyone is saying, 'This is it. This is what we've spent the entire summer to achieve,'" said first-year Racine Scouts Drum Major Austin Culver. "And here it is: We had one of our best runs of the season." For many members of Les Stentors (14th, 72.50), 43 of them new to drum corps, performing in an enclosed stadium was a new experience. Yet the most difficult thing for members wasn't the acoustics, but performing with a group they had connected with all summer for the very last time. "I am happy with the show, but sad because I love drum corps," said trumpet age-out Jacques Roy. "Going on the field was the best moment." Roy spent five years with the corps in the horn line, leaving the field with one final piece of advice for participants of drum corps: "Just have fun." 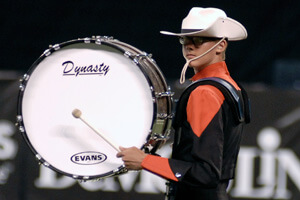 Strangnas
The only corps participating in the International division, Str?¤ngn?¤s, took 15th place in Semifinals, scoring a 70.60. This small but determined corps consisted of a more experienced member base than previous years. First-year percussion staffer Oskor Oberg called this the "best season ever" for Str?¤ngn?¤s. "We have a lot of members that have been doing this for three years now, so we have a lot of experience. A lot of our percussionists go to the same school and they live together." Blue Saints (16th, 59.40) had a record-breaking season in 2010. Jordan Alvey, battery percussion, summed it up: "We've come a long way," he explained. "We started two months ago, got the music memorized, then learned the drill. They've become a group I'm very proud to have taught. It's been their highest season yet and I'm proud to be a part of that." The corps' score is a full four points higher than last year. Today was a milestone in their long history. Fifth-year mellophone Daniel Faubert said, "We've been doing well for our corps this year. We've broken record after record set for ourselves. Making Semifinals was a huge thing for us because we've never been to the Semifinals ever before." "They worked very hard in an atmosphere that they had never experienced before," said Alvey. "The highlight was toward the end of this season when the corps really came together. That's when they understood and came together as an organization, as a drum corps, and as a family." View scores from this event. Contributing to this report: Ryan Cain, Christina Mavroudis, Darcy Wallace, Chris Weber