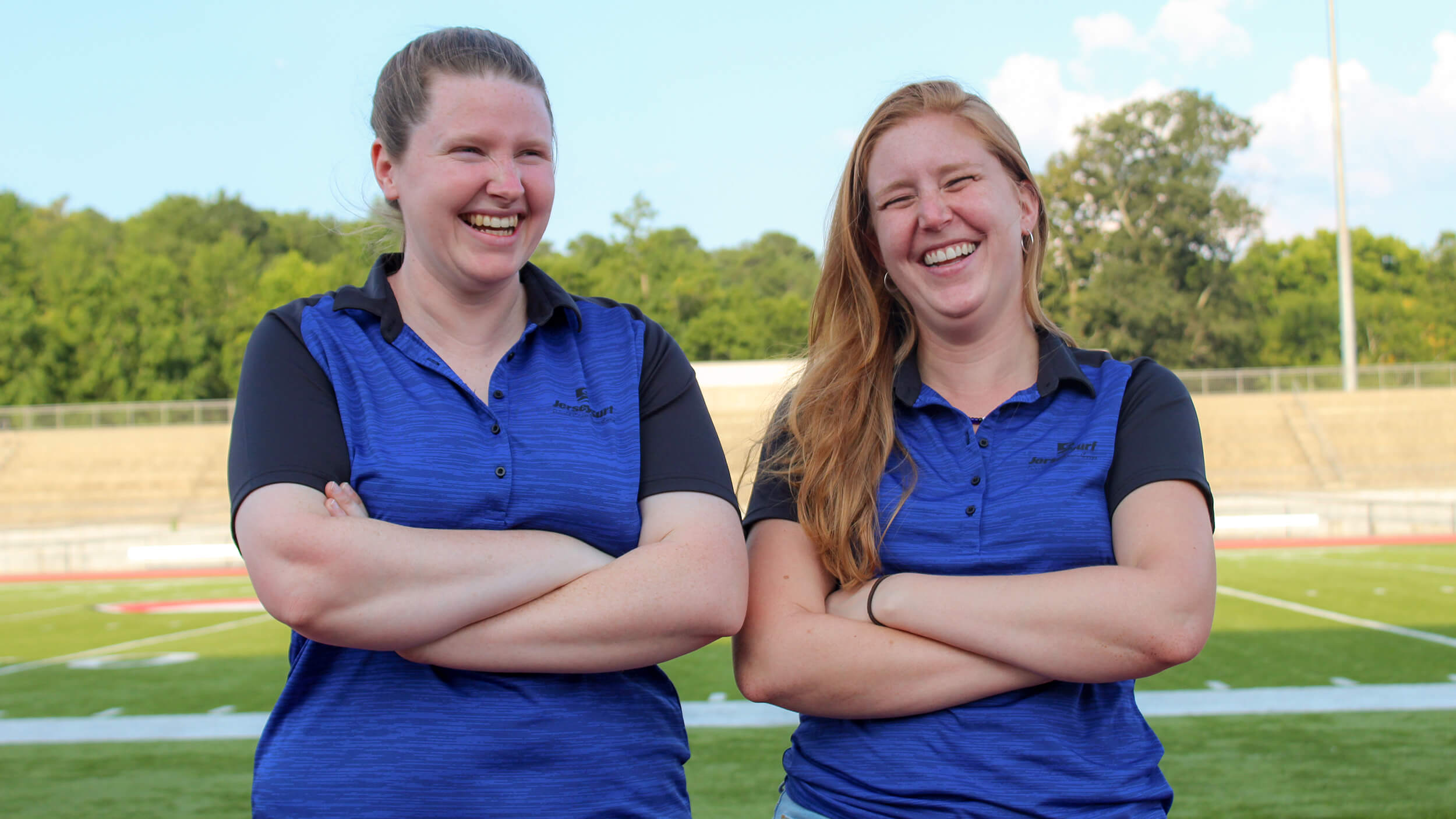 Every drum corps has a unique platform of leadership to drive it from spring training to World Championships Week. For Jersey Surf, that platform comes in the form of two women, dedicated to the details of an organization that helped shape them as young adults.

Julie Hill and Stephanie Dutcher, educators and Jersey Surf alumnae, pack up at the end of each school year to spend the summer on tour with their old corps.

As driving forces of Jersey Surf’s leadership and corps logistics team, Hill and Dutcher are a unique duo. The two tag-team to direct the corps members during the summer, trading their classrooms for an RV and heading down the road until the fall term rolls around.

Hill is a co-tour manager and a member of Jersey Surf’s board of directors, and Dutcher works as the Assistant Corps Director.

Their responsibilities lie in the details of the drum corps, from working out housing site logistics to making grocery and supply runs for the members. Throughout the summer, they consistently lay the groundwork for the corps to run smoothly for the duration of the season.

And while much of their work occurs behind the scenes, they run corps meetings and address members’ issues one-on-one, often acting as the most visible representation of leadership at the administrative level.

“In some ways we don't have titles for what we do in the summer,” Hill said. “But I think for the most part, the members that have been at Surf over the past few years know Steph and me as their primary leadership.”

And their roles with the corps are not limited to their time on the road during the summer. While both are full-time teachers, Hill as a college psychology professor, and Dutcher as an elementary instrumental music educator, their roles with Jersey Surf remain prevalent throughout the school year as they facilitate corps logistics long before the summer tour is in sight.

Together, they bring a combination of their education backgrounds and passion for the activity to the organization each year.

Long before their professional association, Hill and Dutcher were connected through the drum corps. Both marched at Jersey Surf together, Hill in the color guard and Dutcher as a baritone player in the horn line, only really crossing paths, however, after aging out and revisiting the corps as staff members.

“Steph and I were in the corps together, although we had never spoken,” recalled Hill. “I was mostly around the other color guard members.”

And their paths back to corps involvement were unique in and of themselves, Hill taking a six-year hiatus from Jersey Surf for grad school, as Dutcher snagged an immediate staff position with the corps.

“I was on the visual staff for my first year as a staff member,” Dutcher said. “Visual staff doesn’t do much during the winter camps so I started doing other things at the camps to stay busy and try to help other people.”

“It happened at a time where our director of operations had been looking to cycle out of his role here, and I worked pretty closely with him leading into it,” she said. “By the time we were on the road, I was teaching and doing administrative work. And by the end of the summer, I decided that even though I was a music educator, I would transfer into more of an administrative role here. I knew that there were always going to be people who wanted to teach and there weren’t always going to people who wanted to do the more thankless jobs.”

With Dutcher secured as a steady hand in the administrative side of Jersey Surf, Hill’s contributions as a volunteer and board member allowed for more stability to guide the direction of the corps.

“In 2015 I came back to do some volunteer admin work, and I’ve been back here every summer since 2017,” Hill said. “After it came about then that Surf had never had any alumni on the board of directors, I was identified as someone who could have relevant skills. I was already re-engaged with the corps at the time, and so it all worked out.”

As a permanent duo on the administrative team, the two have been inseparable, working closely together at every turn to prepare the drum corps for success.

“The administrative life can be thankless,” said Dutcher. “But that’s where the need was. It takes all kinds of people to make the corps work. Being on the admin staff is all about getting everyone involved.”

While unique in their co-functioning dynamic, Hill and Dutcher are also somewhat of a rarity, acting as two of only a handful of women in the drum corps activity to be fully immersed in the leadership aspect of administration.

Still, their roles in the ranks in the corps contribute to the growing dynamic of women involved, both setting standards and breaking down predisposed ideas of how leadership in the marching arts might appear.

“In many ways there are still not a lot of women in the upper level positions,” Hill said. Being in the activity and noticing where there are women — because there are a lot of men — and taking note of how those women present themselves, what they’re doing within their organizations. It helps you see how things have changed.”

But to the two of them, being women in the activity hardly pertains to their responsibilities on the road. The idea of female leadership at the highest point of Jersey Surf is, above all else, a normality for the membership of the corps.

“We’re the ones out there talking to the corps members on a daily basis,” Hill said. “I hope that this is giving them good role models, and that to them it's just normal to have women running the drum corps, telling them where to go and what to do.”

The women at the forefront of Jersey Surf have instilled their corps members with a sense of normality in female leadership alongside a desire for excellence established in the details of their roles.

And as role models for the corps, their dynamic will continue to set a precedent for members to follow, embedding a charge in the core of Jersey Surf to pursue greatness in the small tasks of the everyday.

“I think a lot of it is that no matter what your title is, we all can be making an impact,” Hill said.

“We all can be leading.”

Give back to drum corps on #GivingTuesday 2022
Read more