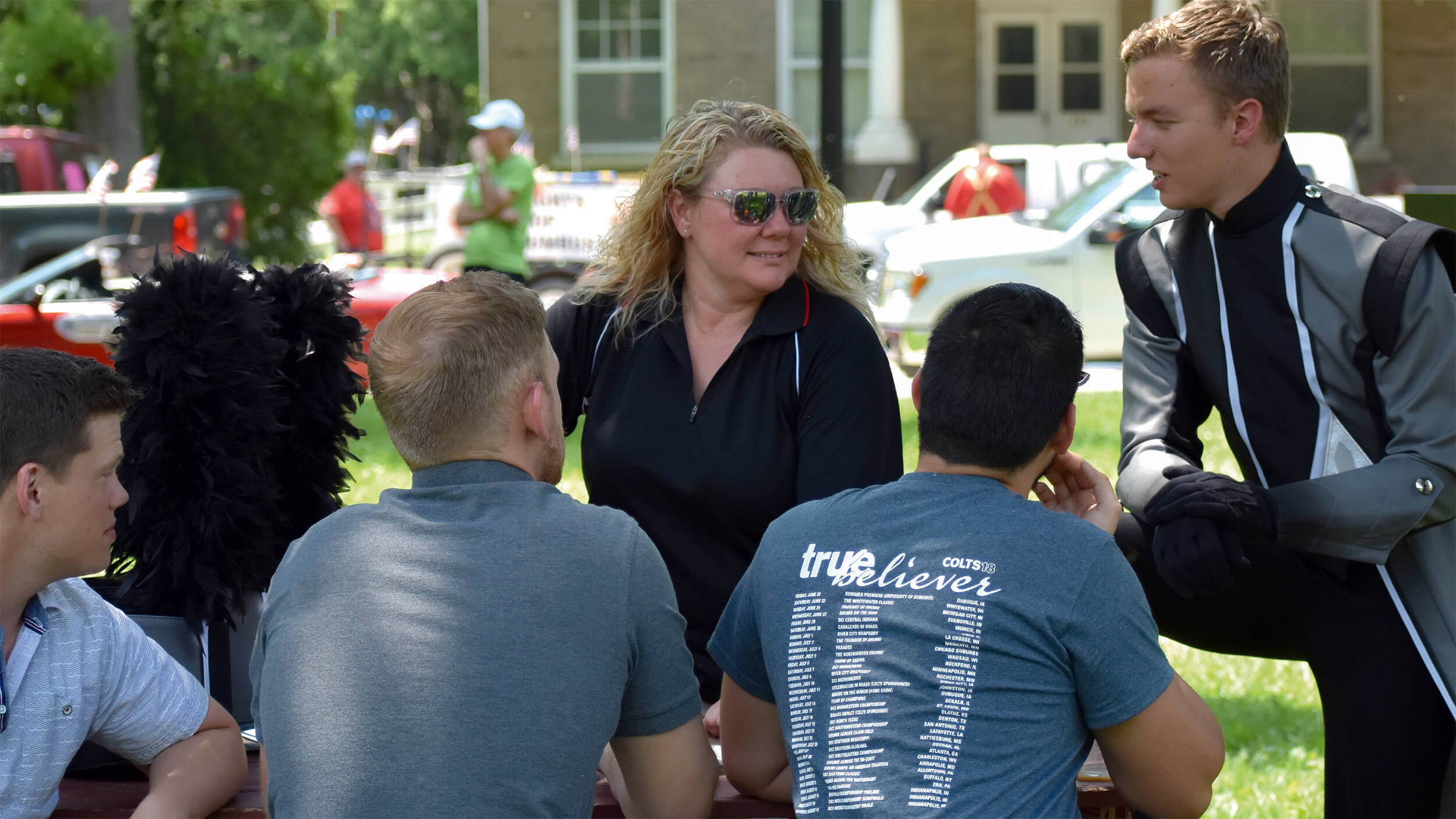 For thousands of performers each year, “aging out” is a necessary step in the drum corps cycle.

At the end of their age eligibility on the Drum Corps International stage, many hone their musical talents in classrooms to inspire young musicians. Others step back and become spectators, allowing new generations to pave the way for the activity to grow and evolve each year.

For a few, however, the love of drum corps keeps them directly involved for years to come. Those few become educators that direct from a press box, mentor performers through the chaotic life of a summer tour, and stand eagerly on the sidelines of each performance, detailing notes of how to better each young musician along the way.

Vicki MacFarlane, director of the Colts, is one of those few. An alumna of the Dubuque, Iowa-based corps, she has been immersed at every level of the organization.

“I marched in 1994 and 1995 with the Colts as a baritone player,” she said. “And I never did age out, actually. I ventured back into the drum corps activity in 2001 and directed the Colt Cadets for 11 years. After that, I became director of the Colts.”

With her rise through the ranks, her connection to the activity has only strengthened. And her maintenance of a personal relationship with the corps has given her a platform to exhibit her educational ability and passion in a way that connects personally with her students.

MacFarlane works with a fervor, both on and off the field, to create environments of excellence and education in every facet of her organization. And her dedication has not gone unnoticed. Standing out among her peers, she has earned accolades as the recipient of DCI’s George Bonfiglio Chairperson’s Award and the Women's Leadership Network of Dubuque’s Women of Achievement Award in 2018.

And since finding her way back into the activity, her journey with the Colts has helped shape the next generation of drum corps members.

“I think having an environment of support — of transparency — helps create a healthy place for everyone,” she said. “Having an understanding of diversity and inclusiveness creates a healthy environment. We want our members to have a place where they feel they have a voice — where they can say what they need.”

MacFarlane uses her natural connection to both the drum corps activity and the Colts organization to infuse the organization, from the ground up, with a sense of confidence and integrity among both staff and membership.

“I want to help make sure that our staff members can build confidence, that our members have confidence and can trust their gut intuition on what's right or wrong, how to handle things,” she said.

Role Models in the Ranks

For MacFarlane, a strong sense of representation during her performing years drove her ongoing pursuits of drum corps involvement. As a music education major she found role models in the staff who trained her while a member of the Colts.

“We actually had a lot of strong female membership in the Colts at the time,” she said. “There were a lot of females in the corps who I looked up to as role models for myself, having gone through college as a music ed major.”

And the representation she found to actively encourage her music education pursuits has continued to inspire her work off of the field.

Her involvement with IN STEP has allowed for that representation to take another step in creating environments where young women feel they can excel in the marching music community.

“It provides a great learning environment for all of us,” she said. “I think it's something — whether we're staff members, administration, or members — where we can all learn from each other and strengthen the opportunities we have of our female membership.”

From a personal standpoint, MacFarlane, has even found a community of her own within IN STEP — a place that allows for casual discourse while providing educational opportunities for women in the activity to pursue.

“It's a great group of incredible women,” she said. “It recognizes opportunities, creates awareness, and builds collaborative events and efforts.”

As for the future of IN STEP, MacFarlane aims to continue the creation of a positive environment, taking the lead as an influencer.

“I want to start encouraging more to make sure that music education is in consideration for our female students,” she said. That will have the most dramatic difference down the road.”

A pursuit of Relentless Energy

In all of her pursuits, Vicki MacFarlane has remained consistent. Her contagious energy and drive to build a healthy environment spills onto the membership and into the mentality of her corps.

“She’s a great leader and a great role model,” said Carli Castillon, a third-year baritone section leader of the Colts. “It’s great to have positive role models like her to help push me to be the leader that I am today.”

MacFarlane’s philosophy, centered on establishing a climate of transparency, allows the students at the Colts to develop as individuals alongside their musical pursuits. Fostering an environment that allows them to grow will continue to be a priority in the future of the organization.

“I've often thought that drum corps creates a higher sense of understanding, respectfulness and responsibility in students,” she said.

As for her own developments, she has no plans on slowing her pace. MacFarlane aims to continue inspiring young women in the activity, while actively setting a standard of excellence among her own membership.

“I want to be remembered for relentlessly setting a standard and example of an environment that develops respectful and responsible students,” she said.

Each year, MacFarlane’s students will continue to “age out,” entering new phases of life and leaving the competitive marching world behind. But the standards of respect, courage and transparency instilled in them will continue to grow, eventually passing to the next generations of drum corps performers; Vicki MacFarlane will remain at the helm.