The annual Drum Corps International World Championship Individual & Ensemble (I&E) competition was held Wednesday, August 8, 2007 in various locations in downtown Pasadena. Hundreds of corps members competed in a large number of categories; including a variety of brass, percussion, color guard, dance and woodwind classes, the latter added two years ago to give corps members who play non-corps instruments outside of their corps experience a chance to shine on their major instrument. One interesting element of the I&E event is that corps members compete head-to-head with each other, regardless of corps affiliation. Therefore, a member of a small Division III corps could end up outscoring a member of a top Division I corps. This day is all about the individual (and small ensemble) effort as opposed to what happens on the field. Below are some comments from those who competed in the event, followed by some comments from those who came to witness this special part of the Drum Corps International World Championships. 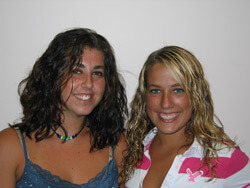 Liz Mitton (left) and Christina Gault
Christina Gault and Liz Mitton march as members of Pioneer's color guard and performed in the auxiliary caption on flags and sabres. They mentioned they would practice their routine whenever they were out doing laundry or shopping, working out the routine on any open surface they could find. Mitton had performed at I&E before, but this was Gault's first time. "In the show, I perform whatever they write for me. But here at I&E, we get to show who we are as individuals by picking our own song and writing our own routine," said Gault. Mitton said: "With my own corps members, it's kind of nerve-wracking to perform the routine because they all know me, but with people from other corps, I just want to show off to show them I'm good. Now that it's over, I feel relieved. It doesn't really matter where we placed, what's important is that we got to go out there and show off what we do." 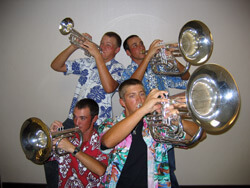 Colts Brass Ensemble
One of the Colts' brass ensembles referred to themselves as "The Shako Bugs," performing "Variations on a Beverage Song." According to member Scott Oliver, who played euphonium in the quartet, "One day during a long bus ride, Mike Freeland (mellophone in the ensemble) started singing, 'In Heaven There Is No Beer.' He was just joking around and the rest of us started harmonizing it. After singing it on the bus in a few different styles, we realized it would be a fun thing to play for I&E. We started taking it seriously and Mike, who took theater classes in college, created a whole skit and storyline around it. We had fun with it, even doing a horn rotation where everyone plays each other's instrument." 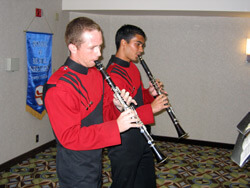 The Academy Clarinet Ensemble
The Academy offered a clarinet duet. Both members are music majors at Arizona State University. Jay Balk started as a brass player in high school because his band had no tubas. When he saw The Academy in 2004, he knew he had to march as a member of the corps. He was grateful for the addition of the woodwind categories because he is more comfortable playing his major instrument. Evan Lynch found out about the corps through Balk. Amazingly, he picked up a euphonium for the first time just a week before his audition with the corps and says he's holding his own. "Having a woodwind category at I&E allowed me to practice my clarinet during the summer. I appreciate the opportunity to do this," said Lynch. 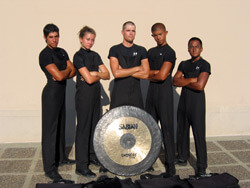 Southwind Cymbal Ensemble
One of the many percussion representatives at the competition was the Southwind Cymbal Ensemble. Shawn Fanello says the ensemble started early in the season creating ideas for the performance, but found they had to squeeze in practicing it after day-long rehearsals and after shows. "It is a lot of work and it does get frustrating," Fanello said. "Sometimes I wish we had more free time to spend on this, but it's fun and we bonded a lot with each other in putting this together. It fostered our friendship." 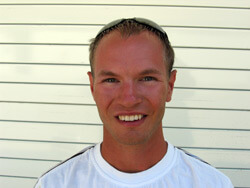 Dave Peterson
Dave Peterson is "aging out" as a member of the Raiders' pit this year. He didn't perform at I&E, but came with the rest of Raiders to support his corps mates. "We all show up as a group because Raiders are a family. In 2003, we had only one member perform in I&E and we were all there," said Peterson. "I saw a number of percussion soloists and ensembles from other corps. It's exciting to see people my age or younger putting on these fabulous performances. I'm a music student and no matter how many performances I do, I still get nervous. And then I see 15-year-olds getting up and playing their solos without an ounce of nerves. They're so calm and they do what comes naturally. It's inspiring and humbling to see so much musicianship and artistry." 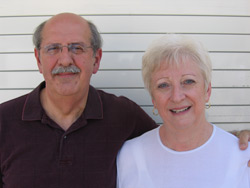 Tom and Pat McHenry
Tom and Pat McHenry are from Cartersville, Ga. Their daughter marched as a member of the Velvet Knights (VK) in 1993, and even after she "aged out" a long time ago, they still come to the DCI World Championships whenever possible. Pat says she likes watching the I&E entries because her daughter was in her high school guard, as well as VK's guard. But she has another reason for liking the visual pageantry. She loves watching guards because she used to co-own the business that made the hundreds of flags that were used in the 1996 Olympics in Atlanta. Pat said: "Fluid movement is the key for me. I watch how fluid they are with the way they toss their equipment. It makes me feel happy to see that beauty in motion. You can't be sad watching someone do something they love." Tom said: "Here at I&E, there's so much artistic talent you see and hear in the solos and ensembles. I see the individuals as individuals rather than just part of a big group. I then find myself looking for those members on the field. It gives us a personal connection and makes seeing the corps more interesting." 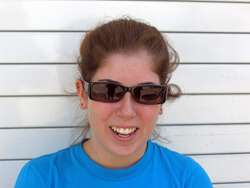 Megan Fitzgerald
Megan Fitzgerald is a mallet player at Riverside Community College and a member of the Pulse Percussion winter line. She would like to march in a corps while she can, but for now, she's enjoying being a spectator. "I've never been to the World Championships before. I like the fact I can watch all my friends in corps perform at I&E and on the field. "I watched a lot of my friends perform and that made me proud. I got to see them shine by themselves, in the spotlight and showing off their skills. Being able to watch dance, brass, cymbal ensembles and keyboards –it's a little taste of everything."