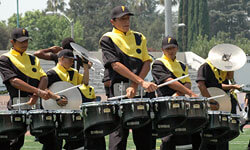 Impulse performs at the '07 DCI World Championships.
Now you have an additional reason to watch the San Antonio Spurs take on the Los Angeles Lakers in the first game of the NBA Western Conference Finals this Wednesday, May 21. That's because Impulse Drum & Bugle Corps will trade the football field for the basketball court when members perform as part of the halftime entertainment for the nationally televised game. The defending NBA champion Spurs will be hosted by the Lakers at the Los Angeles Staples Center for game one of the best-of-seven playoff series on Wednesday. Drum corps fans can glue themselves to television screens for the game on the TNT network (6 p.m. PT, 9 p.m. ET) in hopes of catching Impulse in the act of demonstrating the excitement of drum corps for a nationwide viewing audience. This performance is a highlight of the corps' 10th anniversary season, building on an increased demand for the organization to provide entertainment at corporate functions and local sports events. Impulse also serves as the official drum corps for the Palm Springs Power, a semi-pro baseball team, and is scheduled to perform at several of the team's events this summer. "We are extremely excited to perform at our first national sporting event. I imagine it will be a hype performing in front of 19,000 screaming sports fans," said Impulse snare drummer Chris Rogers. Learn more at ImpulseYouthArts.org.