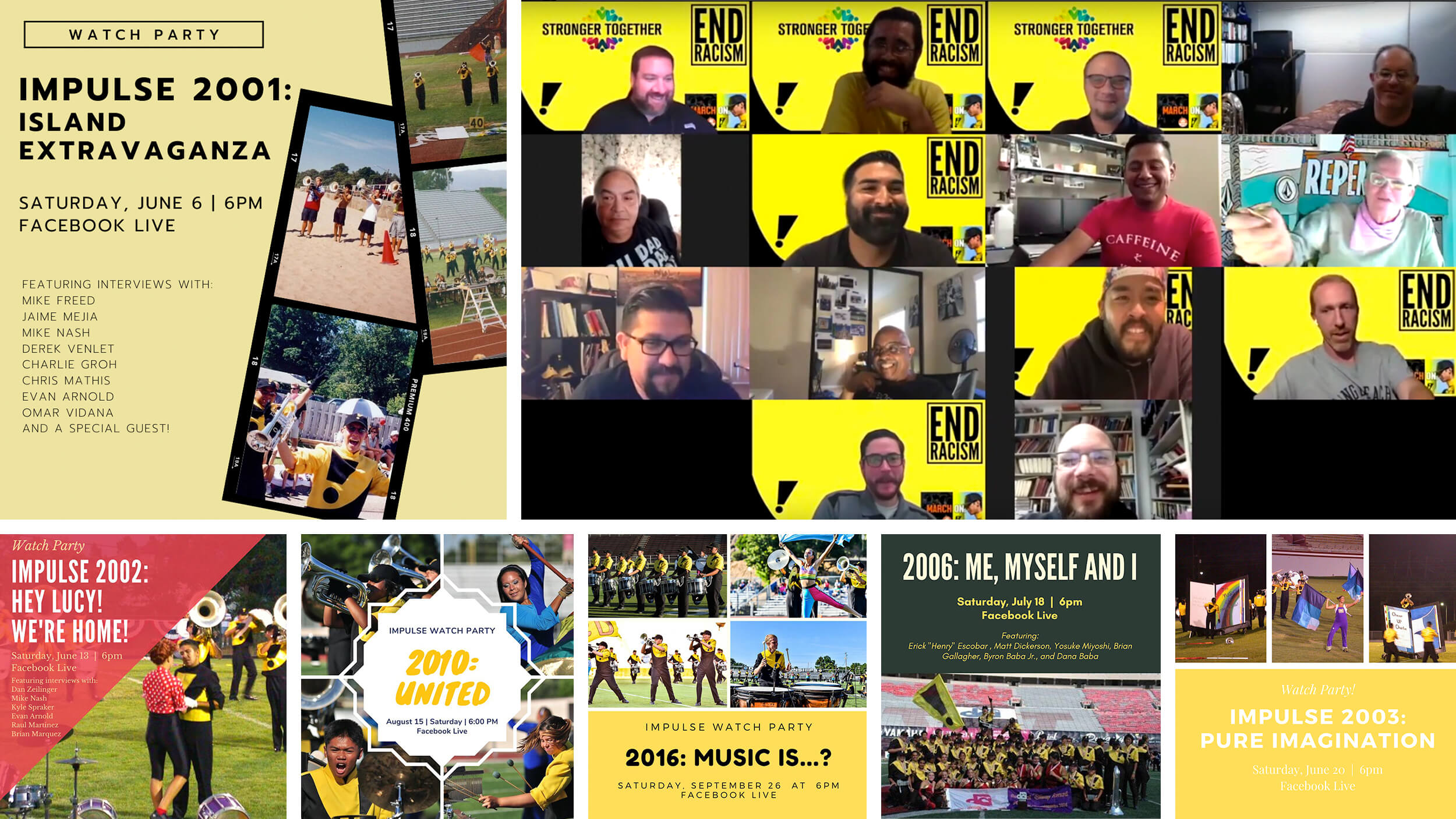 Impulse has been hosting weekly panel discussions with staff and alumni on each one of the corps' productions since 1999.

Aaron Zeilinger sits down at his computer every weekend; he’s been doing so since May.

For an hour and a half, the director of Impulse is transported back in time. He’s not alone on the journey; Zeilinger and fellow corps staff and alumni take the trip together, along with an audience of live viewers on Facebook.

After the cancellation of the 2020 DCI Tour due to the coronavirus pandemic, this is how Impulse is filling the drum corps void. Through live “watch parties,” utilizing Zoom video conferencing technology and Facebook Live, the Southern California-based Open Class corps takes its stroll down memory lane each week to a different season across its 20-year history.

“We've been struggling to get in touch with our alumni for a long time,” Zeilinger said. “What if we just did weekly watch parties? That question sort of kicked off the process.”

At this point, the corps has made it all the way up through its 2017 production. Each week, new panels gather to talk through the memories, performances and show details that make up a given season, all for a live audience on Facebook.

One of the challenges in this undertaking from the beginning, however, was gathering the shows themselves. In its two-decade history, Impulse has competed at the DCI World Championships 10 times, so for the remaining 10 seasons, there’s no DCI-produced video of the corps’ final performances.

Luckily, there are still VHS tapes.

“I had to get a VHS adapter to digitize a lot of these videos,” Zeilinger said.

Pulling together the panelists for the watch parties was much easier. When the concept was first announced, countless members of the Impulse community wanted to get involved.

“Especially the 1999-2005 panels, there were tons of people who wanted to be in on it, because they hadn't seen each other in so long,” Zeilinger added. “It became sort of like a high school reunion.”

Zeilinger’s been involved with Impulse since its inaugural season, and he aged out as a performer in the corps in 2003. He stayed around as a support staff member with the corps for two years following the conclusion of his marching career, but that was his last involvement until 2017 when he rejoined as corps director.

So, given the more than decade-long gap in Zeilinger’s timeline with Impulse, several of the corps’ shows were brand-new experiences for him.

“It's my first time watching a lot of these shows, since they were never uploaded online. In a lot of instances we've been getting these hand-cam recordings from parents or staff members of shows that I've never seen because I never had the chance,” he said.

And even though he’s gone years without seeing many of his fellow alumni, the friendships haven’t skipped a beat.

“You know, it always amazes me,” Zeilinger said. “Pretty much anyone in drum corps, when you haven't seen someone for so long and then you get back together with them, you pretty much just pick it up like it happened yesterday.”

2003 Watch Party is up on our Youtube Page now. Make sure to subscribe and keep up with all of our postings over the...

Since his return to Impulse, Zeilinger has seen the corps through three successful competitive seasons; make it four, though, when you count arguably the most challenging summer the drum corps activity has ever seen.

And when it came to that 2020 “season,” Zeilinger was blunt. At its outset, this summer looked grim.

But the response to something as simple as gathering a few alumni and staff to talk about a season for 90 minutes has been a game-changer.

It’s been beyond anything Zeilinger could have fathomed. Through the power of community, Impulse found a way to keep its ship above water.

“Honestly, the watch party has single-handedly saved us as an organization,” he said. “We've gained six or seven volunteers out of just, ’Oh my gosh, I forgot about this and I want to get involved.’ And we've had donations come in, we've had people spearheading fundraisers, we’ve had people asking, ‘How do we make sure you guys are fine? How do we make sure you can survive?’

“And that’s honestly what saved us,” he added. “It’s the alumni who have kept this group afloat. The watch parties have reignited the organization as a whole.”

For starters, for those who have yet to view one of the episodes, Zeilinger recommends 2001 (“Island Extravaganza”) and 2005 (“The Impulsables”), the latter of which was especially a crowd favorite, pulling musical selections from Disney’s “The Incredibles.”

“I’d definitely say to watch 2001,” Zeilinger said. “There's a lot of big personalities and a really wacky show to watch as well.”

With the watch party series now coming to a close, other ideas have been discussed for how to drive the corps’ budding conversation and community-building momentum into the future, and several have already begun to take shape.

Outside of more traditional fundraising efforts like the corps' PB&J Table Challenge, Impulse in conjunction with local and alumni connections will host a socially-distanced whiskey-tasting fundraiser and also has plans for a virtual ska band concert in the coming months.

“We have two alums who are in ska bands,” Zeilinger said. “And they connected with a bunch of other ska bands in Southern California since there’s quite a scene in this area. They started asking all of them, ‘Hey, can you get in your garage and record something? Do you have a music video you haven’t released yet?’ So we’re going to sell digital tickets for this concert as a fundraiser.”

And as far as 2021 is concerned, there are certainly plenty of unknowns and variables at play; there’s no way to know with certainty what the next calendar year will look like on any number of fronts.

But Impulse has its ideas; maybe it’s some kind of virtual performances, or a more localized drum corps experience.

Zeilinger and his corps figured out how to make things happen in 2020, and if they have to, they can do it again.

“We definitely want to perform, he said. “We think it's important for our kids and important for our family — especially now that we've got our alumni back involved — to get everyone back together in whatever capacity that may be.”