With the 2008 Drum Corps International Summer Tour now well underway, three shows spread across the entire country this past Saturday took center stage, with all DCI World Class corps in competition that night except for the Blue Knights and Pioneer. Let's take a peek at how the recaps came out at each of these shows. When reading about the recaps, it is important to remember that General Effect (GE) Visual and GE Music are the only two captions that are not divided in half prior to being added to the final score. The other six captions—the three Visual captions of Performance, Ensemble and Color Guard, and the three Music captions of Brass, Ensemble and Percussion—are divided in half to determine the overall Visual and Music scores, and because of that they appear to weigh twice as much when listed individually on the recap sheet. To facilitate this, all caption spreads below will first be listed by the score the judge gave each corps. A slash and the divided-in-half number that was counted toward the final total will follow this raw score. (Example: A Visual Performance score of 15.0 would appear as 15.0/7.5, the 15.0 being what the judge wrote on the sheet and the 7.5 the score that was added to the other scores to determine the corps' final score.) Music in Motion: Clifton, NJ View the complete recap. 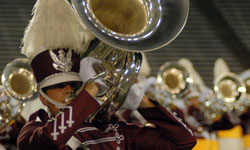 The Cadets
While the Cadets won six of the eight captions, the final spread over Carolina Crown was relatively close at 1.15 points, with the final scores coming in at 82.050 to 80.900. The Cadets gained .5 in General Effect Visual alone and .3 in GE Music. The spread of just .15 in the Visual captions was due to a .4/.2 gain for the Cadets in Performance and Ensemble, but the corps had a .5/.25 deficit in Color Guard. Crown topped the Cadets in Brass by .1/.05, but was down .2/.1 in Ensemble and .3/.15 in Percussion, equaling out to a Cadets Music advantage of .2. So, when it all comes down to what really pushed the show in the Cadets' favor, that .8 advantage in General Effect cannot be discounted. Boston Crusaders, at 77.250, took third in all captions, placing 3.65 under Crown. The corps placed closest to Crown in GE Visual (down .4) and was also down .4/.2 in Percussion. A .8 deficit in GE Music and a 1.1/.55 deficit in Visual Performance contributed substantially to the spread between them and Crown, as did the .9/.45 shortfall in Brass and 1.1/.55 deficit in Music Ensemble. However, it should be noted that in Color Guard, the corps was just .3/.15 under the Cadets. Crossmen, at 72.85, took fourth place across the board. The biggest spreads compared to Boston were in GE Music (down 1.1), Visual Ensemble (1.4/.7) and Percussion (1.3/.65). The corps was just .3/.15 under Boston in Visual Performance. DCI Kalamazoo: Kalamazoo, MI View the complete recap.

The Cavaliers
The Cavaliers took first in every caption in Kalamazoo for a score of 83.150, 3.35 over the Bluecoats. The corps had a .8 advantage in GE Visual and was up .5 in GE Music. A .9/.45 spread in Visual Performance and a 1.1/.55 spread in Music Brass was fairly substantial. Despite Bluecoats coming in third in Visual Ensemble (with Colts in second), the Cavaliers' spread over the corps in that caption was only .6/.3. Bluecoats (2nd-79.800) took second in every caption except for third in Visual Ensemble, in which the corps scored .1/.05 under the Colts. The Percussion caption held in tight, .4/.2 under the Cavaliers. A 2 point advantage over the Glassmen in GE Music and a 1.6/.8 spread over the corps in Percussion, contributed substantially to the Bluecoats' spread over its fellow Ohio corps. Glassmen, with a final score of 75.800, took a hit in GE, where the corps placed fifth, 2.3 under Bluecoats. Only .3 down in GE Visual, there was a 2 point spread in GE Music, in which Glassmen placed seventh. The only other caption in which Glassmen fell somewhat short was Percussion, where the group also placed seventh, 1.6/.8 under Bluecoats. Other than a fourth place finish in Visual Ensemble and the previously mentioned placements, the corps took third in all other captions. Colts (75.100) stayed within .7 of Glassmen to place fourth, capturing third in overall GE, .6 ahead of Glassmen in GE Music (ending fourth in both GE captions). The corps' second place in Visual Ensemble was the highlight. A fourth place finish in overall Visual had the corps just .4/.2 under Glassmen in Visual Performance, with the same spread under Glassmen in Color Guard. The corps stayed just .15 over Blue Stars due to a seventh place finish in overall Music, a full 1.0/.5 down to Blue Stars in Percussion. Blue Stars (5th, 74.950) took third in GE Music and fourth in overall GE. A .35 deficit to the Colts in the Visual caption was highlighted by fourth place in Color Guard, just .2/.1 under Glassmen. The seventh place finish in Music Ensemble was especially noticeable, as the corps took fifth in Brass and fourth in Percussion. Spirit (6th, 72.800) stayed atop the Madison Scouts by .75 mainly due to the .9/.45 advantage in Color Guard and a .9/.45 advantage in Percussion, in which Spirit captured third place. The corps also took fourth in Music Ensemble, .9/.45 over the Blue Stars. Spirit was eighth in Brass, .6/.3 under Blue Stars and .8/.4 under Madison. In between the eighth place finish in Brass and third in Percussion, was a fourth place finish in Music Ensemble, just .4/.2 under Glassmen. The brightest spot for the Madison Scouts (7th, 72.050) was fourth place in Brass, .4/.2 under Glassmen. The lowest placements for the corps in Kalamazoo came in the Visual captions, where the Color Guard took eighth (.9/.45 down from the next highest guard score, Spirit) and eighth in Visual Ensemble. A fifth place finish in GE Music was just .2/.1 under the Colts. Troopers (8th, 70.800) took eighth in both GE captions, plus Visual Performance and Music Ensemble. A fifth place finish in Percussion saw the corps' drum line just .2/.1 under Blue Stars. DCI West Championships: Stanford, CA View the complete recap. 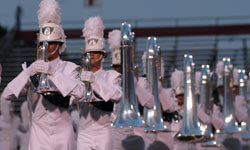 Phantom Regiment
The Blue Devils' score of 83.300 and a spread of 1.7 over Phantom Regiment was thanks to BD placing first in six of the eight captions. A .5 spread in GE Visual and a .1 advantage in GE Music accounted for .6 of the spread, but it was the Visual caption that really made the difference, responsible for 1.2 points of the advantage. The Visual Ensemble (1.0/.5 higher) and Color Guard (.9/.45 higher) scores were dominating factors … less so than the .5/.25 advantage in Visual Performance. BD stayed just .1/.05 over Phantom in Percussion, but fell by the same spread in Music Ensemble and .2/.1 in Brass. Phantom Regiment (2nd, 81.600) placed second in most captions save for its two winning captions mentioned above and third place finishes in Visual Ensemble and Color Guard. Just .1/.05 down to Santa Clara Vanguard in Visual Ensemble, the corps was .6/.3 down to SCV in Color Guard. Santa Clara Vanguard (3rd, 80.150) was 1.45 under Phantom despite taking third in all captions except the two second place finishes in Visual Ensemble and Color Guard, the latter ending just .3/.15 under the Blue Devils. A .9 deficit to Phantom in GE and a .7 deficit in overall Music to Phantom's winning Music scores sealed the corps' third place finish. Pacific Crest (4th, 72.750) took fourth in six captions, but fell to the Academy in both Brass (down .6/.3) and Music Ensemble (down .3/.15). The corps' closest finishes to SCV was the one point deficit in GE Music, a 1.1/.55 deficit in Music Ensemble and a 1.3/.65 deficit in Brass. A 2.2 spread over the Academy in GE Visual and a .6 advantage in GE Music, as well as a 1.1/.55 spread in Color Guard, helped keep the corps solidly above the Academy by 3.95 points. The Academy (5th, 68.800) placed 6th in both GE captions, as well as Visual Performance and Color Guard. The corps was pulled up by fourth place finishes in Brass and Percussion and was fifth in Visual Ensemble and Music Ensemble. Mandarins (6th, 67.650) held close to the Academy by placing .9 higher in GE Visual and .3 higher in GE Music. A .2/.1 advantage in Visual Performance and .3/.15 advantage in Color Guard was negated by the 1.1/.55 deficit in Visual Ensemble. The corps was sixth in all Music captions, just .4/.2 down to the Academy in Music Ensemble, but 1.8/.9 down in Brass and 1.9/.95 down in Percussion.