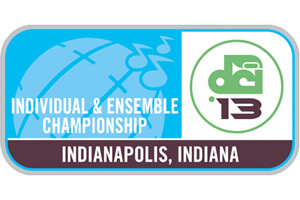 After three years separated along divisional lines in San Antonio and Indianapolis, Drum Corps International's Individual & Ensemble (I&E) Championship presented by System Blue is set to return to its original format in 2013. Members from World and Open Class will compete against each other the week of the DCI World Championships in Indianapolis, Wednesday, Aug. 7. Each year, I&E gives corps members the opportunity to show off their individual and group talents, performing solo and ensemble pieces perfected outside of their normal corps rehearsal schedules. Even further, vocal and woodwind categories give members whose primary instruments may not be included in a normal drum corps setting the chance to perform. The I&E Championship is a free event and open to the public.

What's new for 2013 is actually a return to I&E competitions of the past, bringing together World and Open Class corps members to compete head to head. 2011 was the first year I&E split with the World Class edition taking place in San Antonio in July and the Open Class corps hosting theirs in conjunction with the World Championships in Indianapolis. "The event was originally moved to San Antonio to accommodate corps concerned about scheduling the event during the Championships," DCI Executive Director Dan Acheson said. "As costs to host the events increased and participation dwindled the last couple years, interest from both corps and fans remained high. As a result, the corps asked that we bring the event back to the Wednesday of World Championships Week." Wednesday is typically a down day for corps as they head to Indianapolis for the Championships. Open Class corps will have just finished their competitions in Michigan City, Ind. on Tuesday, with many World Class corps pulling into their housing sites to begin their final rehearsals in preparation for performances with Open Class corps beginning on Thursday at Lucas Oil Stadium. To date, Acheson says 20 Open and World Class drum corps have expressed interest in allowing their members to compete in the 2013 I&E Championship. 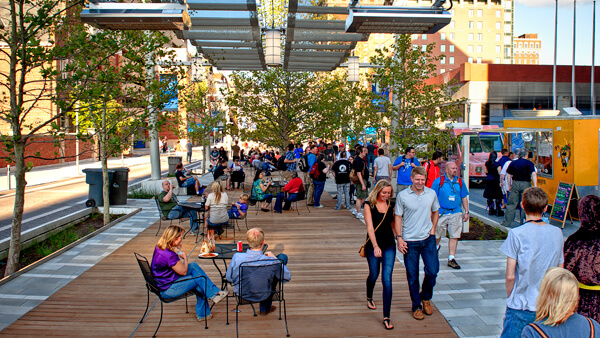 Indianapolis' Georgia Street combines a pedestrian walkway with urban landscaping, shopping, restaurants and more.
Undergoing a $12.5 million renovation prior to hosting Super Bowl XLVI in 2012, Georgia Street stretches through the heart of Downtown Indianapolis, blending a pedestrian walkway and urban landscaping with shopping, restaurants and other businesses. The walkway connects three city blocks from the Indiana Convention Center to Bankers Life Fieldhouse. "Georgia Street will be a fantastic area to experience I&E," DCI Manager of Event Operations Whitney Medworth said. "While we've had portions of the event outside the last couple years in San Antonio, hosting the competition outdoors during Championships Week will be a return to past I&E events like we had in Pasadena in 2007." Performance areas and stages for ensembles and soloists will stretch across the east, west and central sections of the street. Street closures will be in effect throughout the event that is scheduled to run from 10 a.m. to 4 p.m. on Aug. 7. In addition to Georgia Street, DCI will also utilize downtown's ArtsGarden (Indy's iconic architectural glass bubble suspended over Washington and Illinois Streets) for color guard performances. 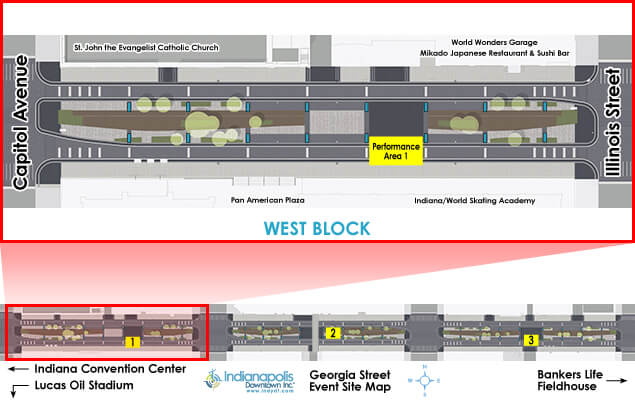 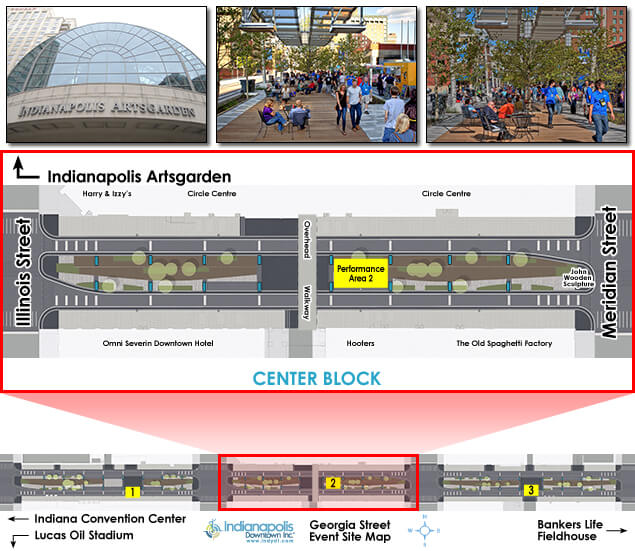 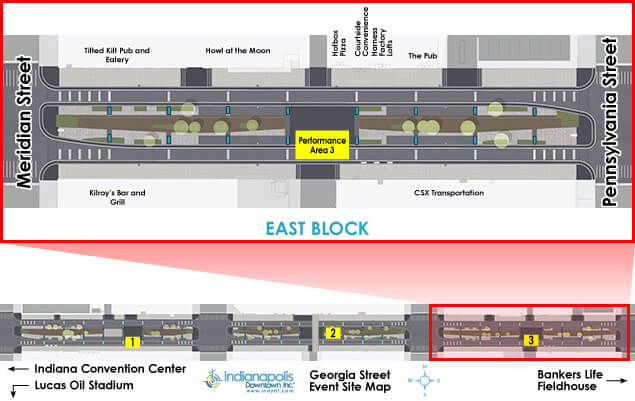 "This'll be one of the densest concentrations of I&E performance in one centrally located area that we may have ever had," Medworth said. "I'm excited about the festival atmosphere that we'll have on Georgia Street, which in addition to all of the shops and restaurants, is also a popular spot for Indy's up-and-coming food truck scene. All of the areas we'll be utilizing will be easy to find and walk to which will no doubt be a plus for corps members, fans, local residents, workers and business owners." Medworth also noted that despite the outside location, the I&E Championship will be rain or shine event, with tents setup along the performance thoroughfare to utilize in the event of inclement weather.

The 2013 I&E Championship will include its usual judged performance categories including those for brass, color guard and percussion. Woodwinds will also have the opportunity to compete in clarinet/double reed, saxophone and flute categories. Newer to I&E will be the return of singing categories for individual and ensemble vocalists.
Blue Devils' vocal ensemble at the 2012 DCI I&E Competition in San Antonio, Texas.
A revision to previous I&E rules, the number of performers in the brass, percussion and mixed ensemble categories has been increased from 12 to a maximum of 18 performers, which is a tweak that's been incorporated into the rulebook to accommodate full front ensemble percussion sections which have grown in size over the last decade. "I like the idea that I&E is going back to its roots with everyone pulled together including World and Open Class corps," I&E Event Manager Christina Mavroudis said. "By its nature, I&E is very inclusive and everyone will have the opportunity to shine no matter their instrumentation or competitive rivalries. I think there's a real appeal there to both corps members and fans." A nod to the inclusiveness of the event, Mavroudis says that one of the new additions to the 2013 I&E Championship that she's most excited about is a judged exhibition category that will allow corps members to showcase any sort of music or visual talent they may have whether it's playing harmonica or juggling bowling balls. "There's such a diversity of talent among corps members, that it would be impractical if not impossible to create categories to highlight all of the performance categories," Mavroudis said. "Think of this exhibition category like TV's 'America's Got Talent'—If somebody plays guitar, or electric piano, but there's not really a spot for it by I&E rules, we're giving these students a stage to bring it out and put on a show."

System Blue is a mixture of products, educational live events and publishing that assist in the development of a System of Excellence for band directors, teachers, staff, designers, performers, and marching members. In order to be successful, you must use the best products in the world and have the skills to take advantage of their quality. The Blue Devils, with their amazing partners and talented staff, have created an all-encompassing program based on the System of Excellence - System Blue. Learn more at SystemBlue.org Georgia Street photos courtesy Lavengood Photography.