Hundreds of supporters turned out at Monument Circle in downtown Indianapolis this afternoon for a rally dubbed "Indy Culture Matters." Organized by the Indianapolis Consortium of Arts Administrators (ICAA) consisting of Central Indiana's largest arts and cultural organizations, the event was staged in response to possible government funding cuts and to raise awareness of the importance and impact of cultural destinations to the Indianapolis economy and to the city's reputation. "The purpose of the Indy Culture Matters Rally is to share with our fellow Hoosiers in a very tangible way, the impact of arts and culture on our everyday lives on a personal, emotional and economic level," said Glen Kwok, president of the ICAA and executive director of the International Violin Competition of Indianapolis. "Most importantly, we want the community to understand that in addition to playing a role as a vital industry in central Indiana's economy, these cultural destinations and arts organizations reach people from all income levels, age groups and cultures whether through direct or indirect participation." According to the ICAA, the arts generate $468 million in economic activity each year in the city of Indianapolis. ICAA organizations annually welcome more than 4.1 million visitors to museum exhibitions, musical performances, live theater and other cultural experiences. 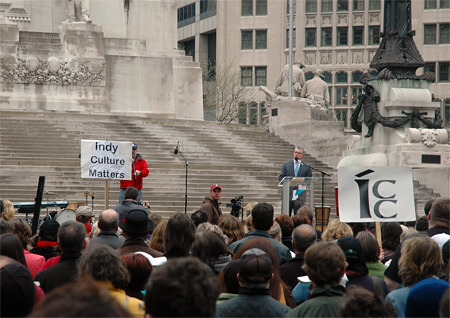 Don Welsh, president & CEO of Indianapolis Convention
and Visitors Association, addresses the crowd.
Drum Corps International relocated its headquarters to Indianapolis in March of 2008 along with its annual series of World Championship events which is expected to have a $10 million annual impact on the Indianapolis community. "As one of the newest arts organizations to establish a home in Indianapolis, we are very interested in working to support and expand access to the arts in our community and throughout the country," said Dan Acheson, Drum Corps International executive director and CEO. Speakers at the rally included superintendent of Indianapolis Public Schools Dr. Eugene White, president & CEO of Indianapolis Convention and Visitors Association Don Welsh, and Indianapolis mayor Greg Ballard, among others. News coverage of the Indy Culture Matters rally: WTHR Channel 13 WISH Channel 8 WRTV Channel 6 Indy Star