From Jan. 24-27, instructors of Drum Corps International member corps and the DCI Board of Directors will meet in Orlando to consider 10 new rule proposals. DCI.org columnist Michael Boo breaks down each of the items that will be considered and gives his insight and opinions on how passage of each rule might affect the direction of the drum corps activity. Part II of this series looks at two different proposals that will attempt to legalize new effects including amplifying brass instruments and allowing for the use of water on the field.Allowed amplification of brass instruments. Expect drum corps fans to be glued to their monitors awaiting word on the passage or failure of this proposal by the Cadets' director George Hopkins. If passed, brass instruments may be amplified, either by the use of wired or wireless microphones. Like the proposal for electronics also currently on the table, if passed, this would not be implemented until 2009. Amplifying the brass would possibly allow for soloists or smaller ensembles to be heard anywhere on the field and could produce some unique musical scoring techniques to mix the sounds across the field. Brass instruments that don't typically pierce through the louder ensemble could be heard as desired or envisioned by the arranger. 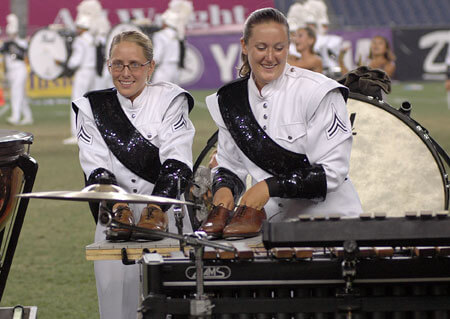 Many corps have utilized amplification percussively to bring new effects to life – like this '05
Phantom Regiment tap dance routine. Next weekend a new proposal to allow amplification for
brass instruments will be weighed.
Part of the logic in allowing this is that amplifying the front ensemble has generally proven to be a success in the eyes of many, with certain sounds that could never be heard before now being better appreciated by the audience. As amplifying the front ensemble has opened up new sounds and effects, so might allowing the brass to be amplified. Some may say that if a brass instrument can't be heard, something is wrong with the staging. Others may feel that there is nothing to fear and that amplifying the brass is a natural evolutionary step. Some might even say that louder is better, no matter how the volume is ultimately achieved. This proposal is not intended to take an entire brass line and make them louder and more powerful, though that is one question that might be asked during discussions in Orlando. Would a corps be allowed to amplify its entire line? Should there be a limit as to the number of horns that could be amplified at once? If there is a limit, could that restrict some of the interesting backfield sounds that could be exploited with no limits on the number of horns that could be amplified? In his proposal Hopkins admits there will be unique concerns presented by amplifying the brass and he believes being acclimated to the use of such techniques would work out any problems. As for the judging of the effects and techniques, he implores the judges to judge what they hear as opposed to what they expect.
Use of water in a corps' production. A few years ago, the DCI Board of Directors passed a rule prohibiting the use of water or any other liquid on the field. This was precipitated (pun intended) after several corps used water effects during their show. The liquid ended up on the field and created wet spots that were unanticipated by the following performing corps and also by the turf managers of indoor stadiums that are not built for water drainage. 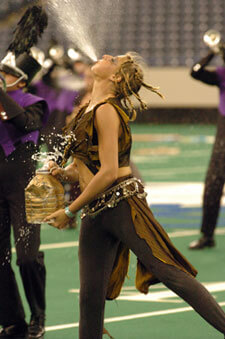 Water effects like this one seen in the Magic's
2004 production, were banned after a rule prohibiting
the use of liquids on the field was instituted in 2005.
At the time, those involved in discussions on the proposal to ban the use of liquids admitted that there was a possibility that the restriction of liquid as a visual prop could remove some creative opportunities. It is this closed creative avenue that is addressed in George Hopkins' proposal to allow for the use of water and water-based materials, effective in 2009. Hopkins is not asking for this earlier rule to be overturned, rather for the rule to be adjusted to allow for the creative use of water as a visual prop or for various instrumental effects. In response to a question raised about the same concerns that instigated the current rule banning water, he says he agrees that water cannot be allowed to touch the field. So what exactly could be considered the creative use of water? A few years ago, the Kennesaw Mountain High School marching band from Georgia utilized vertical threads strung between giant frames (sort of creating the appearance of rectangular harps) for an intriguing cascading water effect that was quite captivating, especially when the water dripping down the threads suddenly changed color. It was one of the most memorable effects seen at the Bands of America Grand Nationals that year, and it greatly enhanced the beauty of the music. It should be noted that these devices were encased so that no water could escape the enclosures. In a note from Hopkins, he mentions the possibility of using water-based paint to create signs on the field in real time. Perhaps a corps could do a show about the visual arts and create real pictures or paintings as part of the show. There also are musical possibilities in allowing the use of water. One such effect is known as a "water gong." It involves lifting a gong in and out of a bucket of water, changing its pitch as it's submerged and lifted out. It's an eerie sound that has been simulated in the past instead by placing an upside-down cymbal atop a timpani head. The DCI Board of Directors will need to decide if this proposal has merit and can be implemented with due concern for the reasons the water prohibition was previously implemented in the first place, or if it's simply all wet.
Coming soon on DCI.org: Parts III & IV look at three proposals that deal with placing restrictions on amplification and soundboard operation. Part V will examine the four remaining proposals that deal with topics including judges, performer age limits and length of performances. Read Part I: electronic instruments.