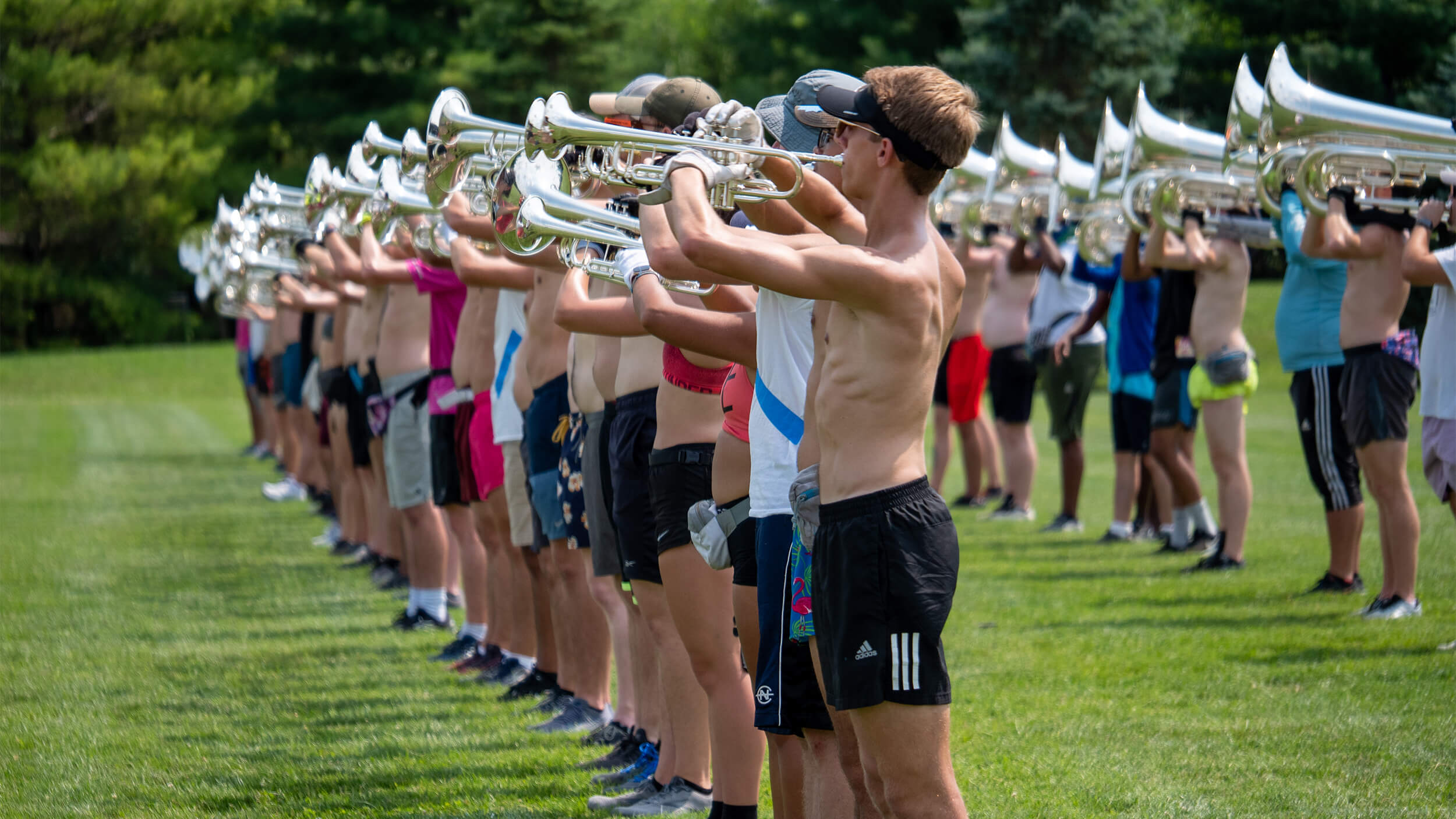 The Bluecoats horn line rehearses on the campus of Indiana Wesleyan University on July 14. Photo by: Drum Corps International

It’s a statement that’s true for everyone in the drum corps activity, in a sense. The past year and a half that saw normal drum corps operations shutdown—in response to the COVID-19 pandemic—has been an exercise in pausing and waiting for performances to return to the field.

For Bluecoats, though, those three words—serving as somewhat of a tagline for the corps this summer—extend beyond the obvious.

“It's what we were planning for 2020,” brass arranger and designer Doug Thrower said. “And obviously, we didn't get to do that.”

Act One was the Canton corps’ silver medal-winning 2019 production, “The Bluecoats,” based on the music of The Beatles. Act Two, titled “Lucy,” was supposed to take place a year ago.

Intermission wasn’t supposed to be this long.

“I think a lot of people felt that there was more that needed to be said with The Beatles’ music production and what they brought to the world, and we're continuing their stories,” trumpet section leader Andrew Roembke said. “Now this year, we're going to explore the story of ‘Lucy,’ and I think it's a very well-done production, as always from the Bluecoats design staff.”

“We decided, for this summer,” Thrower added, “that we would get out of our system and finish what we started.”

“Lucy” centers around the focal-point character of The Beatles’ 1967 song, “Lucy in the Sky with Diamonds,” which was primarily written by John Lennon.

The Bluecoats will be offering a plethora of Beatles tunes for fans to be humming this summer at various stadiums along the DCI Celebration Tour, and based on the performers’ excitement for the 2021 production, it’s reasonable to assume the musical repertoire will be another set of crowd favorites like in 2019.

Having now spent nearly two years focused on the “Lucy” show concept, Thrower noted a variety of key musical highlights that have been tossed around for quite some time.

“We have a couple effects, a couple gags that we've been discussing, literally for years,” Thrower said. “There's one percussion effect that I'm really excited about, that I think probably goes back eight years that we've been talking about trying. And this looks like it's going to be the right show to do that.”

“We've kind of put our own stamp on it and we're trying some really fun things out,” Thrower said. “I'm excited to hear it and see if it all works.”

For color guard member Tom Jackson, one of a number of veteran members in the 2021 corps, being able to put an extra exclamation point on their emphatic 2019 season is a major added bonus to their long-awaited return to the activity.

Watch the 2019 Bluecoats' "The Bluecoats"

“I can't speak for the people who didn't march in 2019,” Jackson said. “But for our veterans who returned for this season, to know that it was Act Two, especially for ageouts, it's like a perfect ending … And to know it's our last one, it's unimaginable.”

The return to the field, though, hasn’t come without its challenges.

It’s been quite a while since corps members have experienced all-day, everyday rehearsals in the heat of summer. That’s understandably been quite an adjustment.

“People are still getting back into feeling what drum corps is like and what spring training is like,” Roembke said. “And, I mean, no one's done this in two years.” 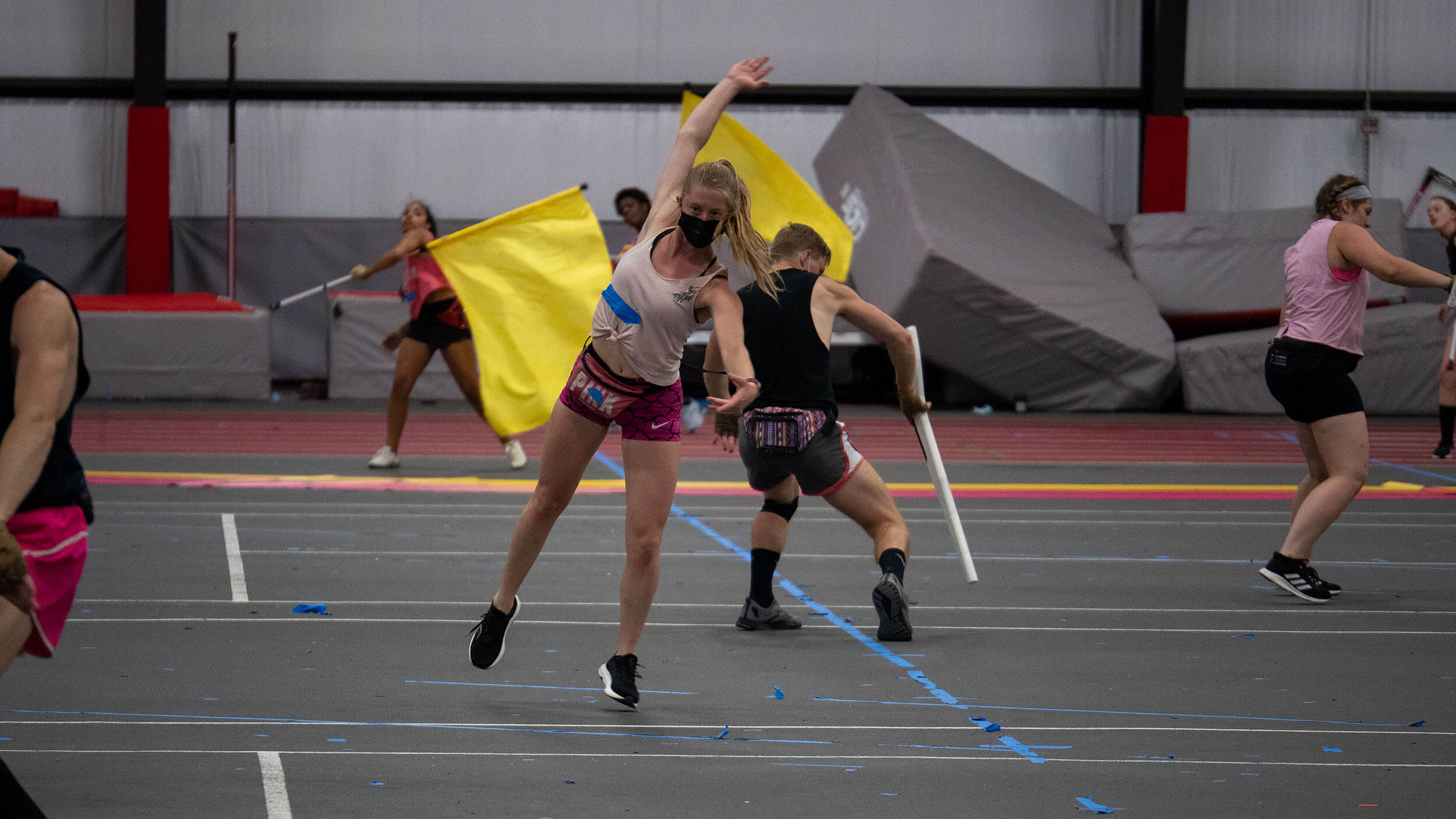 But of course, it’s been well worth it. As Jackson attested, it already feels like preseason training—which has been underway for Bluecoats since July 1—is flying by.

“It's been a crazy two weeks so far,” he said. “It's unbelievably fast, it feels like every day goes by faster and faster.”

“Last summer was very tough,” Thrower said. “Seeing all the happy faces and seeing kids work hard and have a common goal, it’s special. Everything that's making this special is what should be making the activity special all the time, as far as I'm concerned.”

Before joining the 2021 DCI Celebration Tour, the Bluecoats will make two special performances in their hometown of Canton, Ohio. August 1's Party in the Plaza Concert is a free public event at Centennial Plaza in downtown Canton that will also feature the Canton Symphony Orchestra and local rock bands and musical artists. On August 2, the corps will return to the picturesque grounds of the Gervasi Vinyard, owned by former Bluecoats director Ted Swaldo, for a sold-out concert.