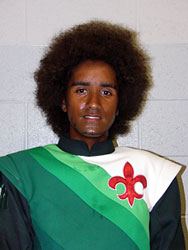 Junior Van Aerde
A four-year member of the Netherlands-based drum corps, Jubal, Junior Van Aerde, 21, from Goes, Netherlands, spent his 2007 summer in the United States performing as a member of the Madison Scouts' snare drum line. In an interview with Christina Mavroudis-Dempsey, Van Aerde talks about some of the differences between his Drum Corps International and Drum Corps Europe experiences, his favorite parts of DCI's 2007 Summer Music Games Tour, and more. "Yeah it is a lot more hard work than I expected," Van Aerde said about his experience with the Madison scouts. "Drum corps in the Netherlands in that case is totally different than what it is here. Listen to the audio interview. (MP3)