From a Colts press release: Iowa Governor Chester J. Culver recently was in Dubuque attending to a series of functions, including a proclamation presentation to the Colts and Colt Cadets naming the organizations, "Iowa's Ambassadors of Music." The event came together quickly, and on three days notice, all but eight of the Colt Cadets were on hand for the presentation and to perform a concert for the Governor and many state and local officials. 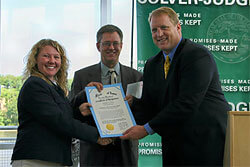 Colts' Vicki Schaffer and Greg Orwoll with Governor Culver
The event took place during a school day, and members took school time off to perform. Rarely have members been asked to miss school for either the Colts or the Cadets, but with such an educational opportunity available to the kids, it was worthwhile. Cadet members in attendance represented 31 different schools in the Dubuque area. The 70-strong Colt Cadets sounded and looked impressive, and both the Governor and Dubuque Mayor Roy Buel took time to listen to the entire show and to meet many of the members and parents as well. Longtime Colts fan and city councilman Ric Jones after hearing the group perform said: "Are you sure this is the Cadets and not the Colts? Wow!" 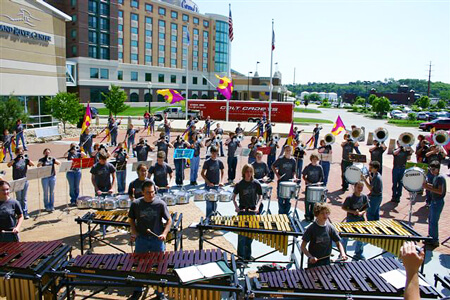 Colt Cadets
The proclamation states, "In the name and by the authority of the State of Iowa, Chester J. Culver, Governor of the State of Iowa hereby officially recognizes Dubuque Colts and Colt Cadets as "Iowa's Ambassadors of Music." The proclamation further states, "On behalf of all Iowans, we salute the members, parents, staff, and volunteers of the Dubuque Colts and Colt Cadets and wish them continued success." www.colts.org