I am home again from another camp weekend -- the final camp of the season, actually. If I could only use one word to describe everything, it would probably be, "Wow." The guard joined us to make for a pretty crowded school -- but that was OK, because felt more like a drum corps having everyone around. It was a rainy weekend in New Jersey, but that didn't stop the Cadets. The field was pretty much destroyed from all of the water, so we ended up lining the parking lot with soap so that we could learn drill. 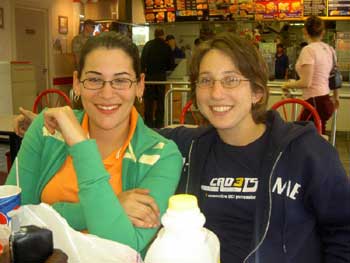 Paula Hyman (left) and Sarah Paradis.
We woke up on Saturday, stretched, and went straight to drill rehearsal in order to get in as much as possible before the rains came. Well, we didn't get too much in before it started to precipitate, but it didn't really matter, because we stayed out there anyway. We had a four-hour block and then ate some lunch. We had chicken patties and macaroni and cheese. It was an amazing meal. Afterwards we headed outside for a couple of more hours to finish up drill. The staff then told us to go inside and grab our horns so we could set up and arc outside and warm up. The whole horn line sprinted into the school, grabbed their horns, and sprinted back out to the arc. It was awesome -- we are maniacs. Anyway, not too long into Chad's awesome air exercises, it started to drizzle. Chad Pence likes when I write about his air exercises. Hello Chad. That drizzle eventually turned into quite the downpour, but it didn't phase us. We were cold, wet and loud as ever. This was our first time playing outside, so it took a little time to get used to, but it was definitely nice to not be cooped up in the cafeteria that we usually rehearse in. We ended up putting our first song, "Kill Bill," on the move with music in this sectionals block. Most everyone's sneakers were soaked. I know I said we were on pavement, but there were some nice-sized puddles that had formed across the field. It was awesome. I bet you'd like to hear about the drill. I can't give away too much, but I will tell you that it is crazy. Hmm, I guess I could tell you about one move. A tight low brass block that does a 360 and rotates -- everyone in there is running. I know Jeff will have us flying all over the place -- just the way I like it. After we were done with "Kill Bill," we learned about 10 charts to our next piece, which is entitled "Liquid." We will be trucking it at 196 bpm for about three or so minutes. I can't wait to see what Jeffrey Sacktig has planned for the rest of the show. We broke for dinner after sectionals and feasted on spaghetti with meatballs, salad, bread, and an amazing strawberry shortcake dessert. Mmm! After all of that good stuff we headed to a Hoppy meeting and discussed move-in and things of that sort. It's always hard to stay awake during those. Something about sitting on a floor for an hour after a long day of rehearsal and a big dinner makes us sleepy. Food coma. Man, I haven't talked about the color guard much, have
I? How rude of me. Well, I'd like to take this time to commend our two new captains for the 2005 season -- Kim and Erika. They worked tirelessly weeks before and all during the camp to make sure that everything went perfectly -- and I can say that it was smooth sailing all weekend. Great job girls! The guard is filled with a plethora of young talent this year, along with a lot of incredible returning members. It was nice to have all those enthusiastic, fresh faces around town. Let's see. We played some more in small sectionals after the Hoppy meeting. Since our shoes were soaked, our tech Jana let us wear flip-flops during all of sectionals. Thank you Jana. We played through a lot of music during small sectionals and Jay Bocook even spent some time with us. After a couple of hours the whole brass line got together to work on/run through all of the show music.
We were on fire. The volume? Deafening.

Our chops got beat up pretty bad, but we had to push on since it was time to get with the drums and pit for ensemble! If I had $1 for every note in our show, I'd be a billionare. I love the music, and this is the most talented group of musicians I've ever played with. Anyway, our faces were super tired, but some how we made it through a pretty long ensemble. We had snack and then the whole corps met with Marc Sylvester for a talk about our show concept, the unveiling of our guard costumes and uniform additions. Let me tell you all about the uniforms. You know what, It might be better if you just check them out this summer. Oh, the suspense. On Sunday we woke up and went to basics for a little while. After that we headed to warm up with the brass staff and worked on some additional charts such as "The Star-Spangled Banner" and a few other tunes. We then went outside and arched it up with the drums and ensembled through our parade tunes. After that it was time to hit the field to ensemble "Kill Bill" with the drums. It was a great feeling of accomplishment knowing that after only a few hours all weekend, we completed a part of our show moving and playing, and nobody died. We normally don't move and play until we are at spring training, so this is the farthest ahead the Cadets have been in quite some time. I had another late flight, so after camp, about seven of us went to the local KFC/Taco Bell for a bite to eat. We ended up staying there for about two hours joking around and being crazy like we always are. After KFC, we weren't quite done eating. We headed down the street to Pennsville Custard and indulged in some ice cream. It was kind of cold out to me, so I may or may not have been shivering while eating my
chocolate chip blast. I had a ton of fun this weekend, just like I do every camp, but I was pretty depressed walking around the airport, I'm not gonna lie. I had about two hours until my flight, so I was just wandering around, looking for Cadets so I didn't have to be bored. I was ready to move in this weekend. I eventually found some of our color guard and a couple of us ended up being on the same flight, which cheered me up. Well, I've got to get going to I can watch the rest of "Jerry Springer" and then head out to work. Shouts out to Rudy, Christen, Craig, Jared and Laura. Thanks for reading! Paula Hyman is a fourth-year member of the Cadets where she is the mellophone section leader. She is 20 years old and currently single. Originally from South Florida, Paula recently made the move to Allentown, Pa., to work for YEA!, the umbrella organization of the Cadets, Crossmen and the U.S. Scholastic Band Association. She ages out in 2006.