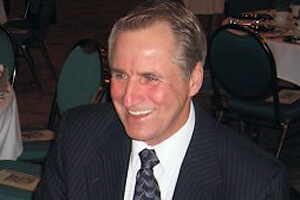 Cavaliers Director Adolph DeGrauwe
Adolph DeGrauwe is the former and present director of the Cavaliers, returning to lead the corps in the fall of 2009 after almost two decades of retirement from the position. After bringing the corps up through the ranks in the 1980s to be a perennial World Championship contender, when he left the position of director in 1990, the Cavaliers had yet to win their first of seven Championship titles and the oldest members of the current corps were just a year old. DeGrauwe, who was inducted into the DCI Hall of Fame in 2000, has witnessed the inner workings of drum corps and Drum Corps International from two very different periods of time. He talks with DCI.org about the past and the future of both himself and the corps.

I started out in 1953 in the Ardennes Drum and Bugle Corps, which was sponsored by a Belgian American Legion club in Chicago to which my dad belonged. He thought it was good for me to get out of the neighborhood and do something with my life. The corps later changed its name to the Windy City Cadets. At the end of the 1955 season, I joined the Cavaliers. I marched in the corps starting in 1956 and aged out in 1962. I played bugle and also later played trumpet in the Chicago Vocational High School Marching Band. When I started in drum corps, bugles had one valve and a rotary. Not knowing how to read music at first, I figured out which notes were open and used the valve according to whether they were on a line or space. That's how we learned music in those days. I was 20 years old when I got married in 1962, and I was one of the first married members of the corps. I still had a year to march. I took over as director of the Cavaliers Cadet Corps when my boys were five and six years old. There was a Cadet Corps at the time, but it was just a training unit that did parades. We turned it into a competitive unit.

2. What is your history with the corps' management?

In 1979, I took over the "A" corps and was the director through 1990. In 1991, I took over the transportation department and was the Executive Vice-President of the Cavaliers' board of directors and held that role all the way up until 2008, when [founder] Don Warren retired. I then took over as President of the organization and still hold that title. And I am once again also serving as the director of the corps.

3. What was it like taking over the organization from Don Warren, a man who not only founded the corps, but served as its president for 60 years?

It was a difficult time to take over from Don, but over the last couple of years, when he was trying to talk me into doing this, as President, I was already getting familiar with all the duties he had. Don still handles the corps' insurance, which is a big relief as that's a difficult thing to do. It's great to have him do that, especially since his work outside the corps was in insurance. Don has done a lot of great things for the corps and in helping develop DCI, so it was difficult to fill his shoes. The fortunate thing is I've been with the corps for so long, was on the board of directors for so long, and was his shadow for a good length of time, that the transition itself was easy. We handled it quite well and the tradition remained intact. It might be more difficult on Don as he isn't involved with the day-to-day calling of the shots. When he asks me what I'm doing, I joke and tell him I'm writing a sequel to his book, "Building the Green Machine." So be prepared to buy another book!

4. What brought you back to being director and what have been the biggest differences since the last time you last served in the position in the '70s and '80s?

There's a lot more people involved now; a lot more kids now. What's happening on the field is a lot different than when I was last director. I'm getting older now and can relax a bit at my daytime job. I have two sons who can take over some of my work responsibilities. That meant we didn't have to bring a new person in to take over the corps. When deciding to take the position again we knew everyone would recognize my name and know we would be getting the job done, moving the corps forward in the direction we want to see it go. During my first year as current director, I found it now takes a lot more of my time than it did the first time around. I also learned it seems no one talks on the phone anymore; it's all done by e-mail. I like the old way better!

5. Up until a couple years prior to you becoming director again, Jeff Fiedler ran the corps for 17 years. He was originally trained under you. Tell us something about that.

Jeff came through the ranks as a performer and was drum major while I was director. He then worked personnel for me. He's great with names; he remembers all the kids. He knows what's going on. I was able to stay behind and watch what was happening with the staff and volunteers as he worked with the men on the field. When I decided I was going to raise a new family, I had to back off a bit and not travel so much, and he became director in 1991. He has a way of seeing what needs to be done, what he wants to do, and he'll do whatever it takes to reach that goal. He learned from me, but I also learned from him—how to be aggressive enough to get done what needs to get done on the field and how to get people moving. When Jeff retired after the 2007 season, he wasn't planning on moving into another drum corps position. He was going to go on his own as a consultant and teacher and move on from there. But then the Santa Clara Vanguard position came open and he felt a need to check it out. After Jeff left, Bruno Zuccala took over as director for two years after having worked as an instructor for 24 years. He is one of those who puts the health and welfare of the members ahead of everything else. Bruno was able to step in and take over, but he told us that this was not going to be a lifetime thing like Jeff did, as he had other things he eventually wanted to do. He did an excellent job and we miss him tremendously.

6. A year ago, you told us that the drum corps movement has changed a bit and is heading back toward the old drum corps style of audience entertainment. Did you still sense that during the 2010 season? How did the corps' 2010 show reflect that?

Our 2010 show was without a doubt one of the fans' favorites. We tried to entertain the audience and still maintain our style, and I think the staff did everything I asked them to do; play loud, have the audience enjoy us and allow the members to have fun doing it.

7. You also mentioned that fans wanted the corps to play louder than in 2009. Do you feel the change in the brass staff affected the volume of the corps in 2010 in a positive manner?

We had a new brass caption head for the 2010 season, Scott Atchison, who came to us after being brass head for the Troopers the previous three years. He really brought that horn line up and his idea was to build off the educational foundation established under David Bertman, the previous brass head. Scott and the new brass staff did just what we asked for, bringing more volume to the field while not losing the technique the line learned under David.

8. You went with a small version of the corps to Japan in October. What was that experience like?

Our trip to Japan is one the members will never forget. We were in Japan for seven days and three performances. One was an educational clinic for Yamaha at an all-girl high school. We opened the five-day National Cultural Festival in the center of Okayama, performing for many people. We had fun with the audience as they were having so much fun enjoying our performance. We also performed with about 200 others from the groups that performed in the festival. Those musicians were surprised how well our members learned the music in just three days. It was a fine showing for the Cavaliers. Afterward, we met a lot of new friends from other groups. We also had a chance to sight-see in Okayama, which is a beautiful city. We met the mayor and exchanged gifts with him. I want to thank Yamaha and the city of Okayama for making this trip possible.

9. What challenges do you feel are being faced by the drum corps community?

The economy is certainly a big challenge right now. Hopefully it is picking up. It's hurt attendance at some of the shows over the past couple of years and has hurt the sale of souvenir items. It's made it difficult for some members to afford to march drum corps. I think the drum corps community is looking at how all the drum corps can best be helped. While corps probably won't be doing less touring, perhaps everyone will all be paying more attention to their mileage, making sure shows are arranged so the corps aren't bouncing back and forth between states. That will also help the finances.

10. What does the drum corps activity need to do to be better prepared for the future?

DCI is continually refining a five-year business plan. There is a finance committee that is on top of this and Executive Director Dan Acheson has presented a plan to get more people into the stands and what we have to do to take care of the audience, the people who are supporting drum corps. There's a lot of conversation about that in the directors' meetings and we're not just looking at the next year, but years well into the future.

11. What do you think the activity can do to stimulate the growth of more corps?

12. Do you have a favorite drum corps memory?

In Whitewater at the 1990 DCI Midwest Regional, I had my one-year-old son Brian with me. That was the year both Blue Devils and Phantom Regiment were undefeated up until the Whitewater show, which was at the very end of July. At the prelims, BD took first, Phantom took second and we took third. All I said to the kids and our staff after prelims was that if we could stay close to BD and Phantom, we could take the evening show. Our guys put on a phenomenal performance and took first that night. All of us were so surprised. My son was crying because everyone was jumping up and down and screaming. And then it started to rain and the corps didn't get to do a finale encore. We didn't win at the World Championship, but that Whitewater show proved to us what the corps could accomplish.