Submitted by the Troopers: The Troopers completed their third camp of the 2007 season, January 19-21 in Cheyenne, Wyo. Camp activities were curtailed on Sunday by yet another Rocky Mountain snow storm, but the corps met its goals for the weekend. 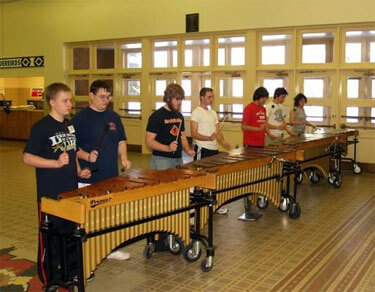 The brass section had a very strong turnout with all but a small hand-full of students in attendance. In all, 61 brass members were present at the Cheyenne camp and were able to unwrap a new set of Yamaha brass instruments. Brass caption head Scott Atchison lead the ensemble rehearsal through the corps' 2007 opener, "Joy" by Joseph Curiale. Work on other portions of the 2007 program continued in sectional sessions. The percussion section had an equally strong turnout with a nearly full battery and pit. There are some limited spots still open in the pit section but those are expected to be filled by February. Color guard members were not present at this camp but will report in April to begin work-outs with the corps. The Troopers look forward to their next training camp in February. www.troopersdrumcorps.org