Submitted by Teal Sound: Teal Sound just completed its second rehearsal camp this past weekend in Jacksonville, Fla. The camp was a huge success with more than 58 brass, 37 percussion and 18 color guard members in attendance. The weekend turnout for the guard was the biggest surprise as since there were three winter guard shows taking place over the weekend throughout Florida which kept another 12 members from attending. The primary focus for the weekend was to rehearse the first four minutes of music with the brass and percussion. A continued focus on techniques was worked on as well. The visual program is well on track for the season as the visual staff was able to get in about six hours of marching techniques. This weekend was a great lead-in to the February rehearsal camp when four minutes of drill will be added to the program. The corps is right on target with the winter schedule due to the talent level of the members and staff with this year's group. 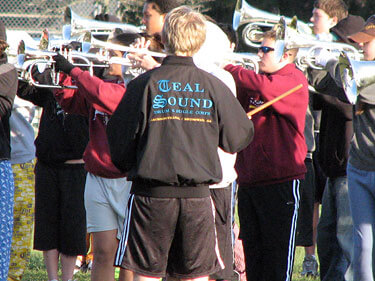 Despite chilly temperatures on Saturday,
Teal Sound took time to rehearse outside.
"It was a great weekend for all involved with the Teal Sound. We had an excellent turnout and the level of excitement members produced throughout the weekend was just tremendous. Our VolunTeal's, led by Operations Director Dennis McWilliams, did a fantastic job with the food, uniform fittings and equipment trailer modifications," said Director Randy Blackburn. "We are all very excited about the outlook for this season and to the future of the corps. All of our members have something very special ahead of them this season as was shown throughout the weekend by all the hard work, effort and the commitment they gave." A special announcement was made at the corps' show-and-tell performance on Sunday to all that were in attendance. Ron Ellis, brass arranger and caption head, and Blackburn will be flying to Helsinki, Finland this coming weekend to meet with the members of the Finnish Contemporary Jazz vocal group, Rajaton, and their managers about the corps programming and arrangements of their music this season. "We are looking at bringing the great styling and unique voicing that this group's music offers to the drum corps activity," said Ellis. "We are proud to help introduce Rajaton's music to a new audience here in the U.S. and we feel that everyone who hears us this season will fall in love with this music as much as our staff and kids have." Teal Sounds' next camp will be held Feb. 23-25, at Middleburg High School in Middleburg, Fla. All are invited to attend the corps show-and-tell performance Sunday afternoon at 1:30 p.m. www.tealsound.org