From the YEA! Web site: January brought another successful camp for the Crossmen of San Antonio, Texas, as corps' staff members found themselves in an enviable numbers situation - many talented musicians and not enough spots to keep them all. More than 90 brass players returned to the Crossmen camp, according to Director Mark Chambers, prompting staff to assess talent levels throughout the weekend. The talent was remarkable, with particular skill seen in the contra section, he said. 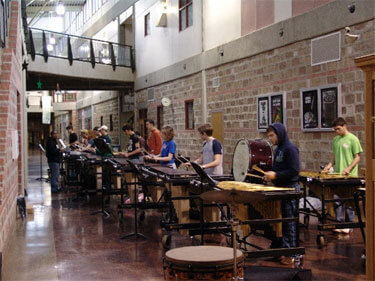 The Crossmen front ensemble rehearses at
Ronald Reagan High School in San Antonio.
"Before the camp, there were roughly 30 trumpets still going for 20 spots, 16 mellos still in the hunt for 12 spots, 26 baritones going for 20 spots and 18 contras going for 10 spots," Chambers said. "In the percussion section, a large number of snares returned, along with eight tenors and 10 bass drums." After a short three-week period, the Crossmen will gather Feb. 2-4, to continue work on the corps' 2007 production "Metamorphosis."