Submitted by the Colts: Despite having to end the weekend early in order for corps members to stay ahead of bad weather, the Colts completed a successful rehearsal camp from Jan. 12-14, in Dubuque, Iowa. 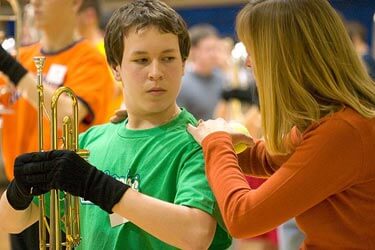 Colts staff member Beth Wilson instructs a trumpet player
during a marching basics rehearsal.
"We've chosen to play it safe, and allow our folks to drive during daylight and during the warmest part of the day," said Colts Director Greg Orwoll. "The weekend has been very successful, and although we are ending camp early, all objectives have been met." Members were on the road by 10 a.m. Sunday morning, and were encouraged by corps management to stop at a hotel if they found travel home to be unsafe. The corps will rehearse again from Feb. 9-11, in Dubuque.

View a photo gallery from the weekend.