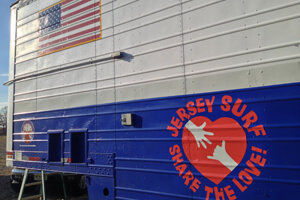 Jersey Surf's 48-foot mobile kitchen trailer.
In the aftermath of Superstorm Sandy, the Jersey Surf Drum and Bugle Corps is working this week to organize support for those affected by the natural disaster that battered its hometown region. "Although hurricanes and strong storms are not unusual when you live along the coast, this storm was the worst kind of perfect alignment of circumstances," Jersey Surf Executive Director Bob Jacobs said. "No one could have ever imagined the scope of the damage this caused over such a wide area, affecting so many people ... It's hard to not be emotionally overwhelmed when you see caravans of hundreds of ambulances, utility crews from throughout the country and massive FEMA and Red Cross response on the local highways and driving through your neighborhood." Doing what they can with their own resources, Surf will be deploying its 48-foot mobile kitchen trailer this week to assist in disaster relief efforts. Jacobs says that the corps has been in frequent contact with the Salvation Army's Emergency Disaster Services in the region thanks to a connection made through a current Surf member's father who is a director with the Atlantic County New Jersey Division of Public Health. Just 30 miles from the corps' home base in Camden County, Atlantic County is one of the many areas on the Eastern Seaboard hit hard by the hurricane and accompanying high winds and devastating tidal storm surge. 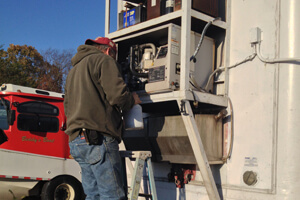 A Jersey Surf volunteer checks the trailer's
refrigeration unit Monday afternoon.
The truck is scheduled to leave from Berlin, N.J. on Wednesday, Nov. 7, though details are still forthcoming on how and where the mobile kitchen that serves nearly 50,000 meals to corps members during its national summer tour will be deployed. In preparation for its departure, the corps has already had a number of generous donors step forward with offers to assist with monetary contributions for food, cleaning supplies, clothing and other essentials that Jacobs says the corps will direct to the Red Cross and Salvation Army as appropriate. Jacobs' own home on the eastern edge of the Central New Jersey coastline has been without power and water now for more than a week. And with an estimated 40 percent of his corps members, alumni, staff and volunteers living in affected areas, he says that the tremendous aftermath of Sandy on the region has "certainly created plenty of opportunity for reflection about one's life and priorities." "During the off-season we'd been discussing with our veteran members taking a few days from our tour next summer to engage in a few community service projects in some of the towns we visit. We certainly had no idea when we started the planning process that we'd be getting engaged with things like this right in our own backyard," Jacobs said. "Although our mission is to provide an exceptional music education experience, we're also in the business of training young leaders for competition in the real world. With this disaster fresh in our minds and with the damage left in its wake on such a life-changing scope for so many people, the geographic location of our organization provides us with a unique opportunity to contribute to something far greater than our regular competitive pursuits." To learn more about Jersey Surf's disaster relief efforts, visit the corps' Facebook page and website for additional information or send an e-mail to info@jerseysurf.org with "Sandy Relief" in the subject line. Donations to support those affected by the hurricane can be directed to the Red Cross and Salvation Army. Visit redcross.org/hurricane-sandy for additional information. Learn more about the Salvation Army's efforts at disaster.salvationarmyusa.org.